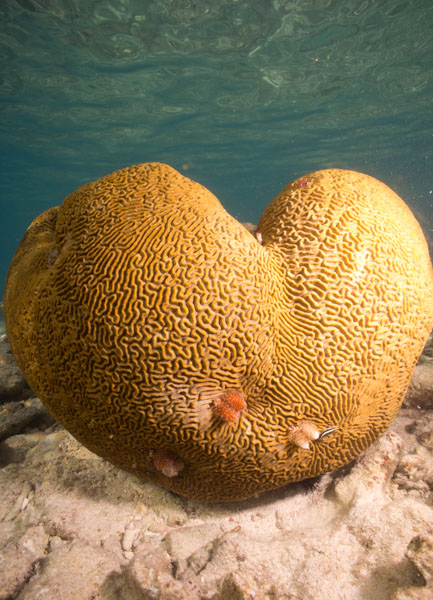 I didn’t plan on becoming a scuba diver.

Growing up my eardrums would scream every time I ventured into the deep end at the local pool. So the thought of spending extended time in deep water wasn’t on my bucket list. That changed pretty quickly when my dive buddy romance led me to Cozumel Island.

Dave and I had been dating a few months when he invited me on a dive trip to Cozumel with some of his underwater photo buddies. Would I like to come along? Not one to pass up opportunities to travel, let alone spend days with my new love, I jumped at the chance and then thought about it. I didn’t dive. I didn’t consider neoprene very flattering and wasn’t drawn to hoisting tanks, figuring out valves and all the other bits and pieces of diving. Nope. I have however always loved snorkeling, so just being a beach bunny  or splashing around shore rocks while his team boated out to dive spots had its appeal. Soon my frequent flyer stash was diminished and the trip was on.

Jacques Cousteau first put Cozumel Islands’ vibrant Palancar Reef  on the map in the 1960’s. Mexico later established a large, protected Marine Park. The once nearly deserted island, just 45 miles south of the Vegas-style crowds of Cancun, became a tourist destination in its own right.

In my case the rub was that Dave wouldn’t arrive until the day after I did. I’d be there for 24 hours, on a little island off the coast of Mexico that I had never visited before by myself. He suggested I take advantage of the swim up bar and perhaps try a half-day resort dive. “They’ll show you the equipment, teach you in a pool and you can see if you like it – or not.”

A month later, more smitten than ever, off I flew. A tortuous, long layover in North Carolina dampened my enthusiasm but onward I went. The small airport in Cozumel was easy enough to navigate. The shuttle out to the dive resort pulled right up to the front of baggage claim. Language was no problem and while there were many different ones being bantered in the crowded van, finding our Resort took no translation. I checked in easily enough and by dinner time had booked a resort dive for the next morning.

Jumping in the deep end

A family of four joined me at the dive shop and the teacher, Marco, a local fellow with sun-bleached hair and an easy smile, led us through a review of safety measures and how to get in and out of the gear. Within two hours we were in the pool, weight belts tightened around our waists and walking into the dreaded deep end.

I confessed to Marco that my ears were a problem, that I hated “high-tech” sports, that I’d rather just watch, but he would have none of it. He patiently explained how to handle painful ear pressure and manage my depth. Onward we walked.

I was the last one to reach the bottom but the last one out of the pool! I kept listening to my breath, slowly circling to watch the others, and while it took some doing, started to relax. The next task was to repeat it all in the open ocean.

Here’s a colorful video by George Wang that’ll give you a good idea of the underwater wonders of Cozumel.

Jumping into the deep sea

Gear checked and loaded, our narrow skiff slid past the pier and soon moored. We had two dive masters for the five of us. I liked the odds and had Marco check my belt, my tank, my mask, before leaning backwards over the side and splashing into the sea. With the BC vest inflated, it was simple enough to bob while holding onto the anchor line. Soon everyone was in and we began our descent. I held to the practiced breathing pattern, squeezing and releasing my nose, as the surface slipped over my head.

The water was bathtub warm and a clear, radiant turquoise blue. I was the last one down while working my nose and ears to release pressure but I made it. Once my feet touched the sand, I drifted into an altered state and watched diver’s bubbles rise in dancing columns. Impossibly brilliant fish mesmerized me, a shy eel slid backwards into a crevice, a lobster – huge! – strolled between outcrops. For the next 30 minutes, I stayed close to the dive masters and just marveled at this new, vibrant world.

What about my dive buddy?

Later that afternoon I haunted the lobby waiting for Dave’s airport shuttle to arrive. Then, his back to me as he signed in at registration, I ran up circling his waist with my arms. He turned surprised as I babbled on about how he was going to have to put up with me studying over the next four days to get my scuba certification and how amazing the dive was and, and, and – until he kissed me, beaming that it was all good. 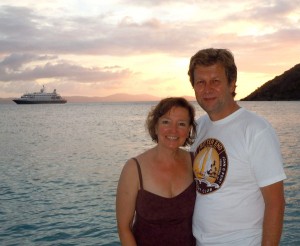 What I learned soon after about my then new love (now almost a decade later,) was that he had been a sea urchin diver for decades with a recent passion for harvesting pictures.

My falling in love with scuba diving cemented our connection and since that first trip, I’ve tagged along on other trips around the world as his dive buddy. We forward to years as a couple exploring tropical waters and returning often to Cozumel Island.

Beth Whitman travels with a passport making a difference 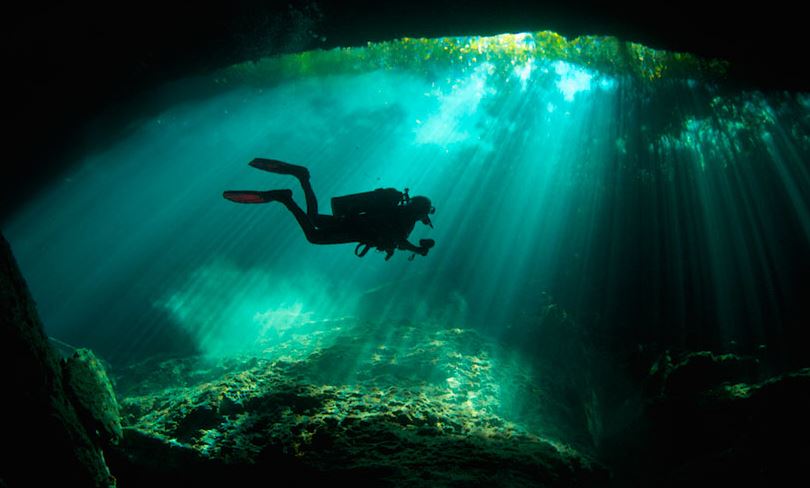