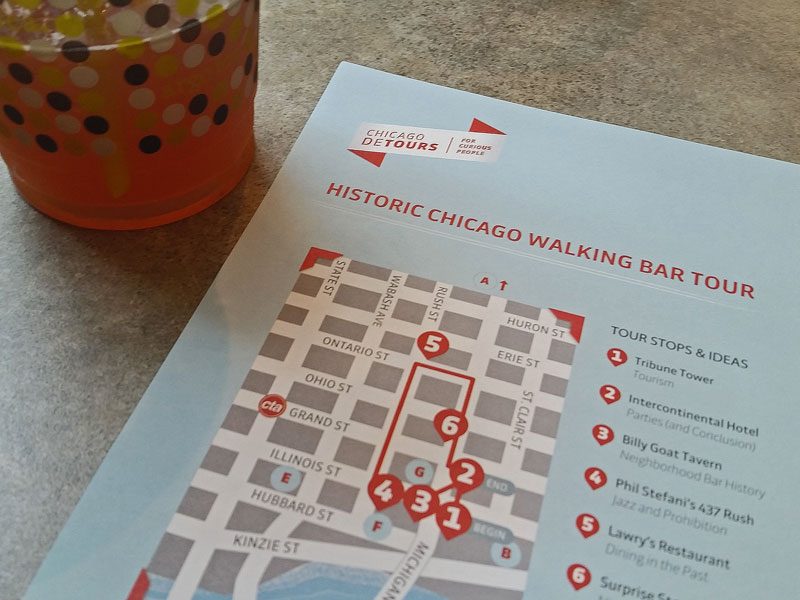 The map for our Historic Chicago pub crawl

Downtown Chicago is overflowing with classic architecture and a history of high and low culture. Early skyscrapers graciously step up and back as they rise to better allow natural light to reach the street and pedestrians below. It’s just one of the architectural refinements that would’ve escaped me entirely if it weren’t for the Historic Chicago Walking Bar Tour and pub crawl. The promise of insights into architecture, local history, great drinks and company lured my travel buddy and me out on a vibrant Friday night. Over two hours we dipped into hidden lobbies, studied classic facades, historic photos on iPads and explored an underground watering hole. The tour began in the Argo Tea Cafe on Randlolph Avenue, an easy walk from our hotel, the Hyatt Centric on the Loop. 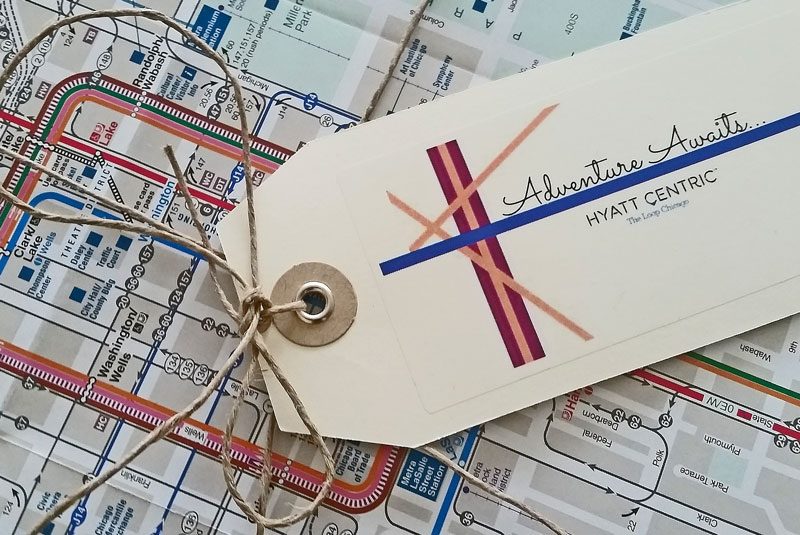 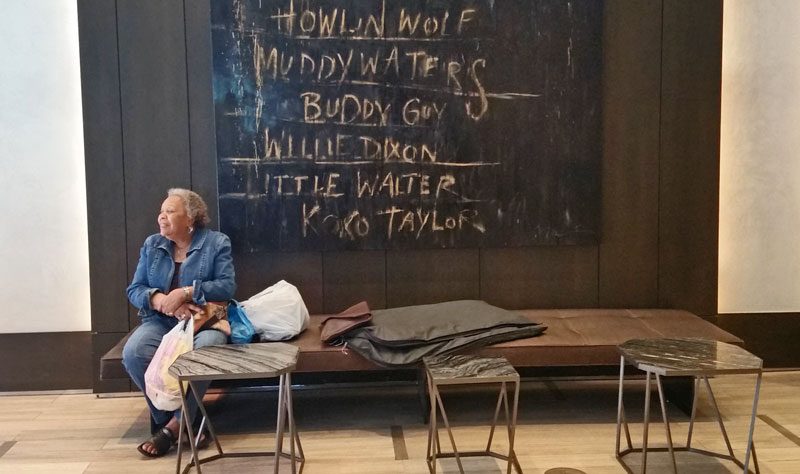 Lobby sitting area inside the Hyatt Centric the Loop 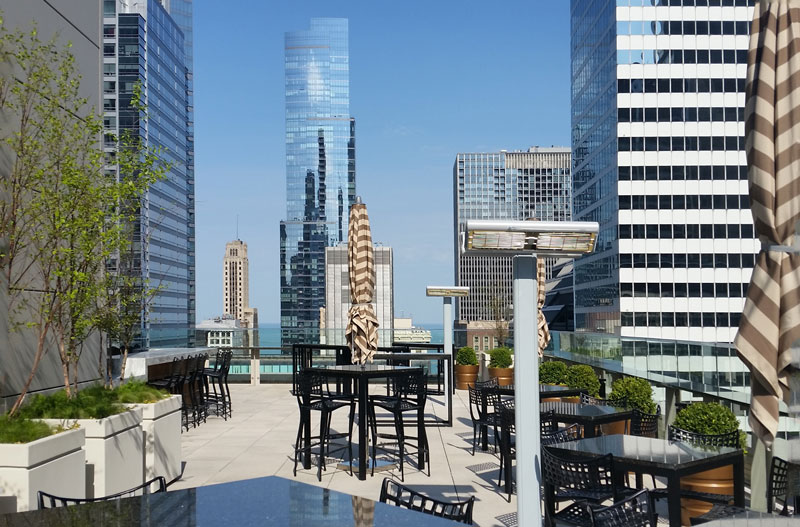 Hyatt Centric the Loop rooftop bar with views to the lake.

Given the mild spring weather it was a pleasure to cross the river, enjoying beds of tulips scattered across wide avenues and stop to sip draft Kombucha at the Argo Tea Cafe. The registration fee covered the basics and tip cash was collected at the outset. After that we simply had to follow the leader, Elizabeth. She spoke quickly and began by engaging us in creative guessing games, then expertly herded us over the 3/4 mile walk. The veil of time was pulled aside with every anecdote, as she pointed out a sconce, bricked over window, elaborate carvings and so much more. 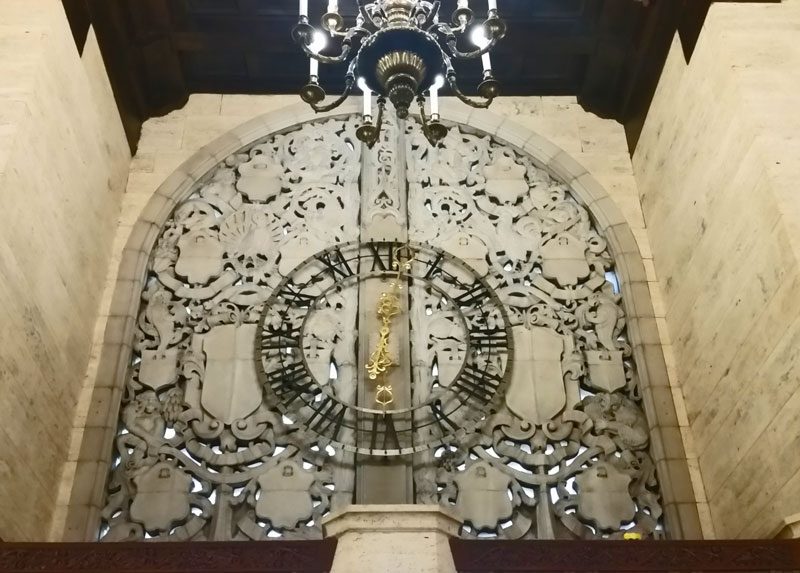 The clock inside the historic newspaper building of the Chicago Tribune.

Through a doorway at the back of the tea shop we stepped into the historic Tribune Newspaper lobby. The towering skyscraper stands as a shrine to news, to a grander era with chandeliers, arched windows and a coffered ceiling that made us hush in respect. The walls and floor were inscribed with quotes with more than 120 stones embedded inside and out from important locations around the world. Most unusual was the tall, muted world map behind the desk. The layout was vertical and pale; mountains and continents stood in relief. Shredded dollar bills had been pulped and molded to create the three dimensional relief!
Out we went to the corner where the Shriners had built their Medinah temple just before the Stock Market crash in 1929. Carved with exotic reliefs with Abyssinian figures and winged embellishments drawn from Islamic designs, the building is topped by a burnished gold dome. Originally, the story goes, it was part of a dirigible docking station before the Hindenberg disaster turned those plans to ash. 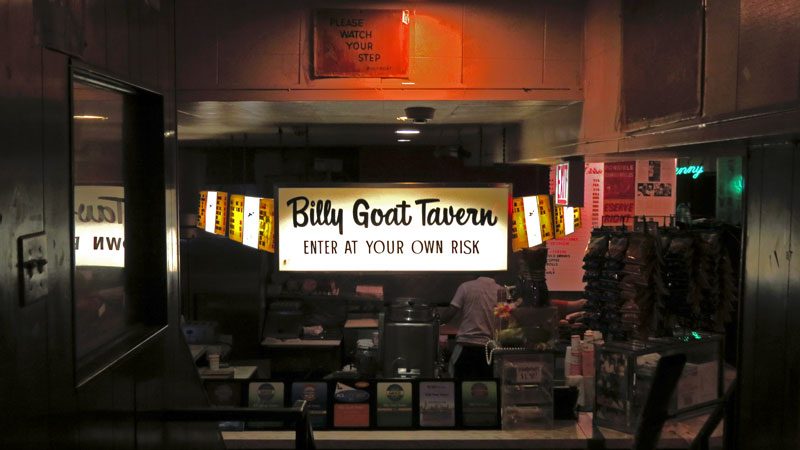 Entrance to the subterranean, Billy Goat Tavern, immortalized in a SNL skit.

The city is no stranger to ashes. The great Fire of Chicago in 1871 devastated nearly 4 miles of downtown. It created a new slate for the captains of industry to erect a more ideal metropolis. They created an underground where trash and delivery systems still keep truck traffic off the upper downtown streets. Downstairs, just a block from the Tribune building, stood a corner bar, The Billy Goat Tavern, immortalized by an early Saturday Night Live skit. We saw the ‘Wise Guys Corner,’ where early newspaper men and women spent long hours listening and drinking. The Goat is home to single/double/triple burgers and local brews. Our samples were served at an alcove table surrounded by framed photos of the original Billy Goat Siannis and his mascot side by side with media giants, sports figures and celebrities. 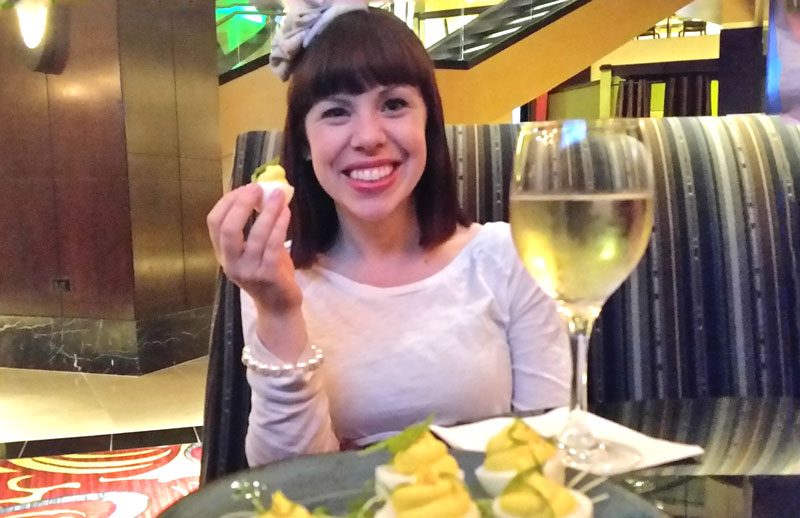 Sharing a snack on our pub crawl with Detours Chicago

Those were just a few of the stops covered in the Historic Chicago Walking Bar Tour. As it drew to a close, we passed the flagship Dylan’s Candy Bar. Cocktails in candy hues, garnished with gummy bears and sprinkles were on the bar menu (for those over 21.) The rest of the multi-level shop was a play land full of teens and young families, topping their evening with sweet confections of all kinds. 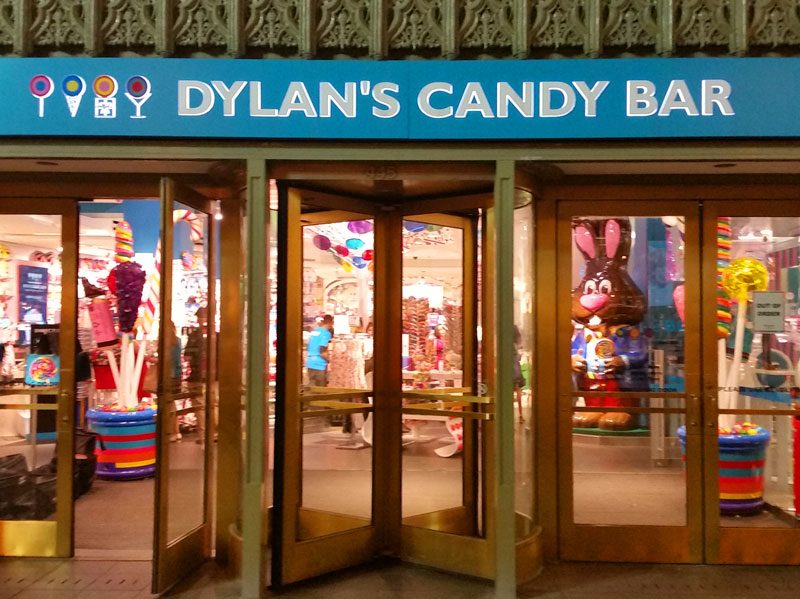 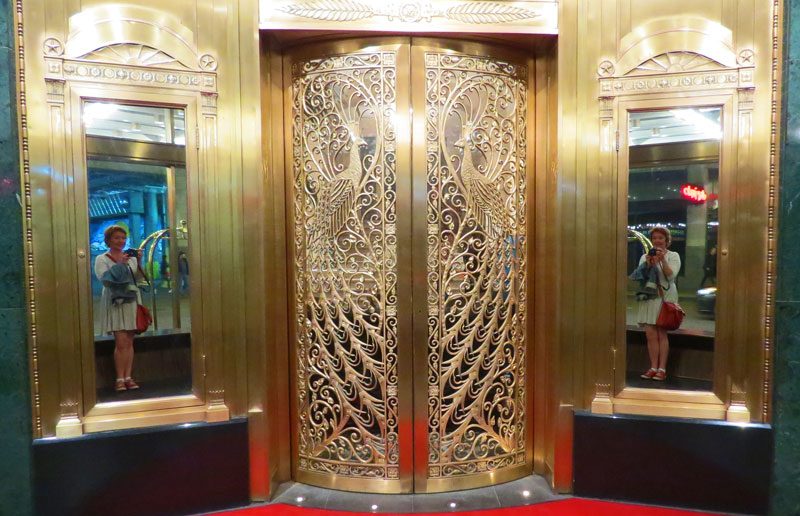 After our pub crawl tour goodbyes we chose a different dessert, a late night brownie, in the hotel where they had been invented. The Palmer House stands proudly full of marbled columns, a cavernous central courtyard. The street lobby once once housed C.D. Peacock Jewelers. When the hotel was rebuilt after the great fire, the jewelers drew the elite in through gilded Peacock doors created by Louis Comfort Tiffany. Inside the lofty hotel lobby several bars were in full flow for the Friday crowd. We chose a quiet booth in the restaurant and enjoyed plates of grilled octopus and vegetables before indulging in a brownie, created from the original recipe. (I’d recommend eating in the bar where it’s a bit noisier but there are better prices.) 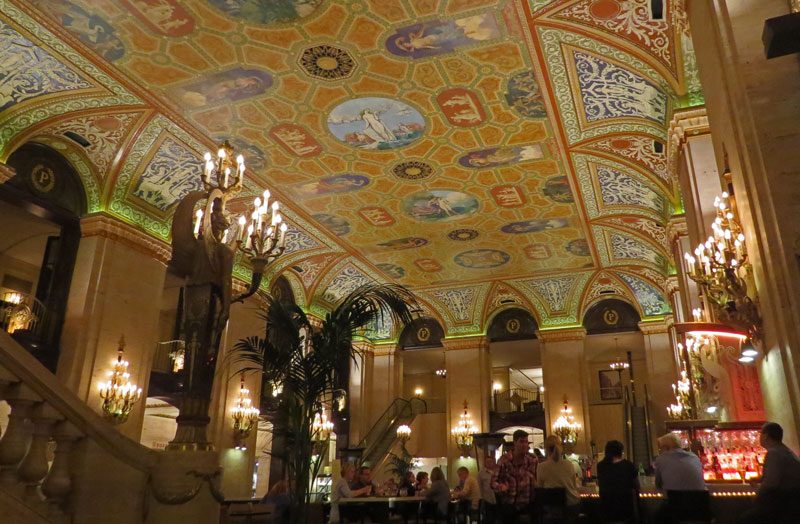 Stepping into the Palmer hotel lobby 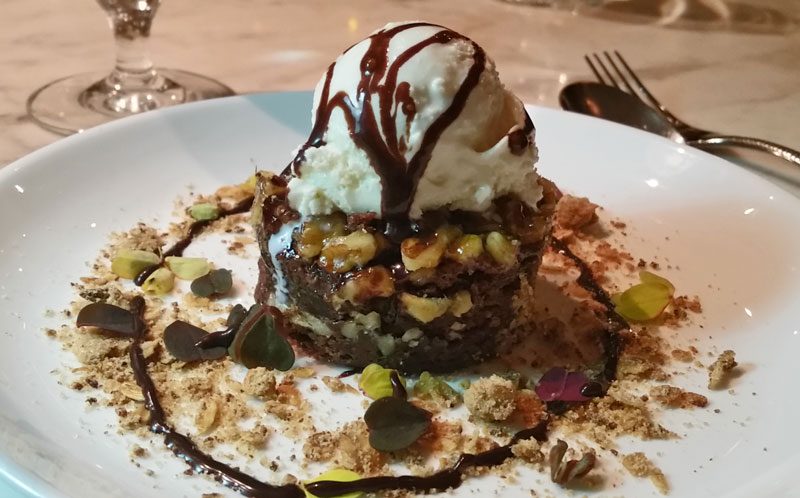 Brownie created from the original, first ever Palmer Hotel recipe.

Bertha Palmer, the original owner’s wife, was a savvy business woman and patron of the arts. She ensured that the City’s elite visited the hotel often. The story goes that, for a picnic box lunch with her society swells, Bertha asked the hotel chef to create a dessert that was less messy than sliced cake. The Brownie was born. Nearly a century later we were served a round Brownie made from the same recipe. It sat on a bed of chocolate syrup sprinkled with chips, nuts and cookie crumbles. My verdict? The round brownie was light, and more milk chocolate than the dark full flavor that modern brownies provide. It’s just a matter of taste, I like high cacao content chocolate, still not a crumb went to waste.
It was getting late but the night weather was mild and the street pleasantly peopled. Full of new facts about architecture, full of delicious food and drink, the walk back to our room at the Hyatt Centric Loop was the perfect night cap. 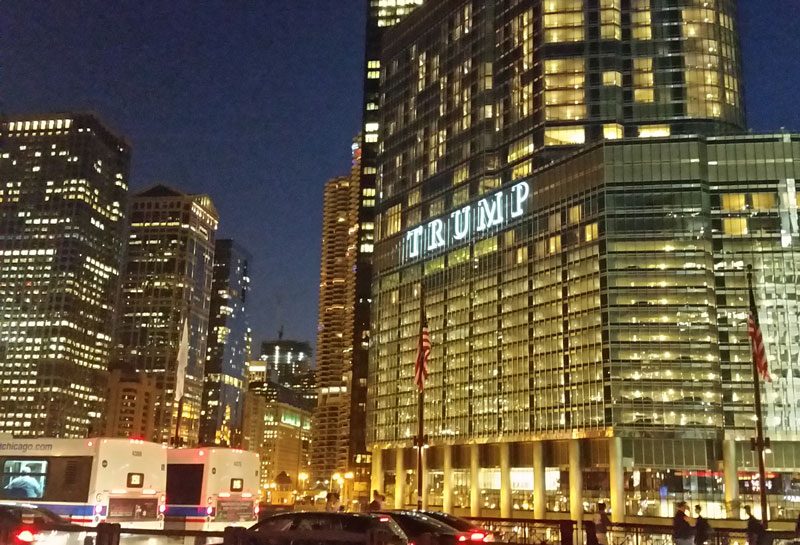 View across the river after our pub crawl. Yes, that’s one of  Donald Trump’s towers.

Disclosure: Chicago Detours offers many architectural walking tours around Chicago. We loved the Historic Chicago Walking Bar Tour and look forward to returning to sample more of their trips. We also thank the Hyatt Centric the Loop for our media rate. Our pub crawl was complementary but all opinions are mine.

If you go on a historic pub crawl

DeTours Historic Walking Tours. The historic pub crawl was our choice but there are many tours to select from. It was great mixing speakeasy ambiance, meeting locals and out-of-towners, plus the tickle of learning while tippling!  Detours Historic Chicago Walking Bar Tour.

Hyatt Centric the Loop: Just steps from downtown attractions, restaurants, the high rail, it’s a new concept in hotel luxury. The lobby is modest but there’s an upstairs lounge, the Corner, with a snack bar, espresso machine, several rooms for dining and meetings. Our room was plush but modest – we had all we needed, enough space, lots of well placed outlets and great WiFi. The staff was courteous, thoughtful and my only regret was arriving a few days before they opened the rooftop bar in the evenings. It’s a perfect perch for a mild evening. The Hyatt Centric the Loop.
Palmer House Hilton Hotel
There are so many historic hotels to enjoy in the downtown Chicago Loop that it’s hard to focus on just one. For this foodie, when I heard that the Palmer House was the origin of brownies and that they were still baking the original recipe, the chance for a time travel tasting was too good to pass up. (Plus the elegant Palmer was less than two blocks from our hotel.)
Hope you enjoyed this post and get a chance to explore Chicago.
Here’s a few pins to share! 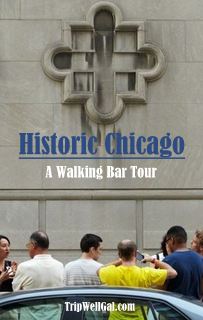 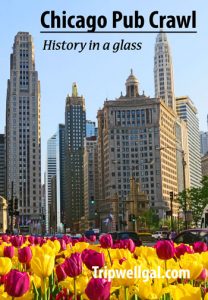 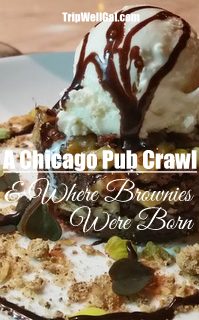 Proudly a member of these linkups. Check them out for other great travel blogs: 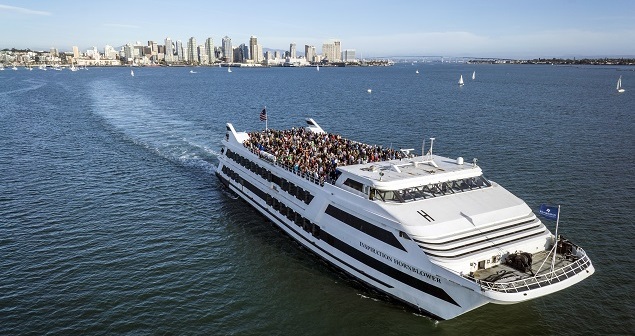 Sunday brunch, the bay and bubbly with Hornblower San Diego