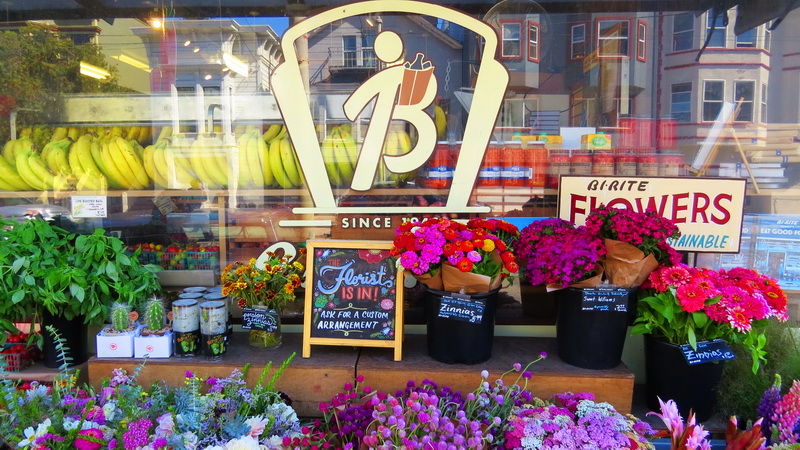 When you’re hungry in a new city you can settle for simply filling your tummy or aspire to great eating. Knowing I’d be famished during my stay in San Francisico’s Mission District, where to eat in the trending neighborhood was a mystery. When Edible Excursions founder, Lisa Rogovin, suggested a tasting tour featuring local food along Valencia Street, my tummy growled in anticipation.
.
Decades before local food tours were a concept, I tasted my first Tempura in a bamboo-panelled Japanese bar on Mission Street. If I’d visited Tokyo before stepping into the red lantern-lit space, it would’ve felt familiar. The shrimp and batter-slathered, veggie wedges were crunchy and cheap, perfect for a student budget. In the intervening years the Mission’s ties to Mexico have dug in deeper. The Tempura house has disappeared but the road still hosts street vendors peddling roasted corn elotes and fruit stalls spill over the sidewalk. Taquerias now open to the street in designerly tones with prices much steeper than my salad days.
.
The street is still grungy but safe. Low riders have moved on and artisans have moved in, knowing there’s opportunity with the influx of tech hipsters. Iron bars still criss-cross over windows and at night, the marijuana cooperative crouches behind a roll-down garage door. One block away however, Valencia Street could be on the other side of the city and that’s where the new foodster central is growing. Boutique cafes, craft patissieries and artisinal breweries are flourishing. 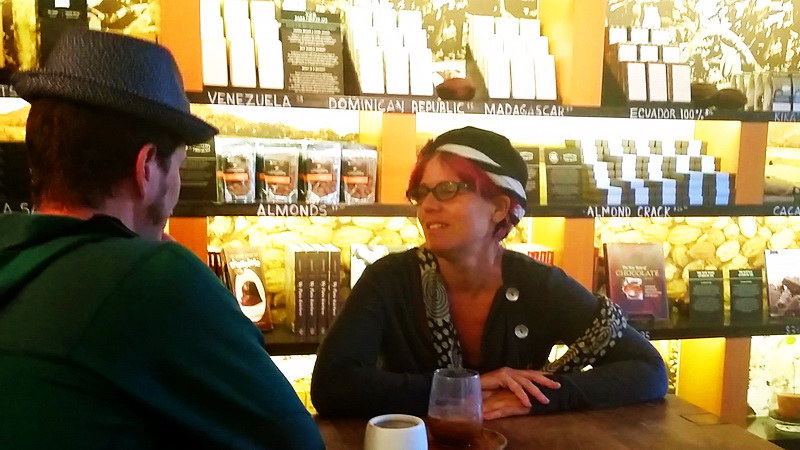 Surprisingly Lisa began our tour at the corner of 18th Avenue and Mission in front of the Duc Loi Market. No flashy store front or sparkling renovations? No, we met at a historic intersection, an apt metaphor for the next few hours.

Cities morph. If the neighborhood was different outside, then inside should reflect that as well. The Duc Loi Market embodies that and has been successfully rolling with the changes for over 25 years. The name means “ethical earnings” and it’s become a model for the demands traditional businesses are facing in the swiftly gentrifiyng area. The owners, originally from Vietnam, continually renew their dedication to serving the needs of the neighborhood with its churning mix of Caucasian, Asian and Latino roots and wide economic diversity. 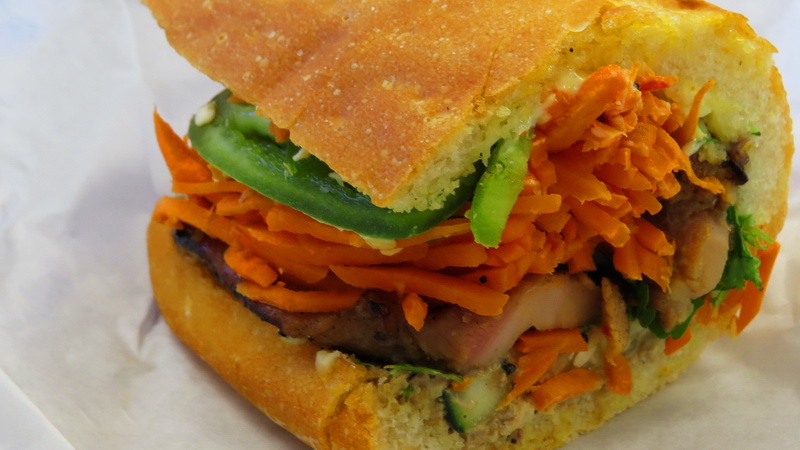 Lisa led me to the back, near the long cooler counter where a sandwich, a tradional Banh Mi waited. Further down the long case were cheeses from Italy, specialty meats and she looked for a pig’s head on the counter too. It was no where in sight on the Monday we visited.
.
After digging into the fresh crunch of the French baguette and through the delicious spiced meat with traditional sauce, we ventured into the rows of products. One collection of BBQ sauces said it all. Artisanal bottles with monochrome, letterpress labels and tony price tags sat on the top shelf. Other shelves held equally delicious, well-known brands for half the cost. Just another testament to a neighborhood in transition.
.
Lisa founded Edible Excursions before food tours were a trendy part of travel. She’s been at the forefront of gustatory adventures from the Ferry Building to Uptown Oakland, from Berkeley’s Gourmet Ghetto to the Mission; helping tasters discover “the importance of local, seasonal and sustainable eats plus signature dishes.” Her custom outings, business groups and weekly tours have gained notice and awards from SF Weekly, San Francisco Magazine and Viator. Craft cocktails and local brews have won her focus recently and soon Drinkable Excursions will be on the regular rotation of tours. 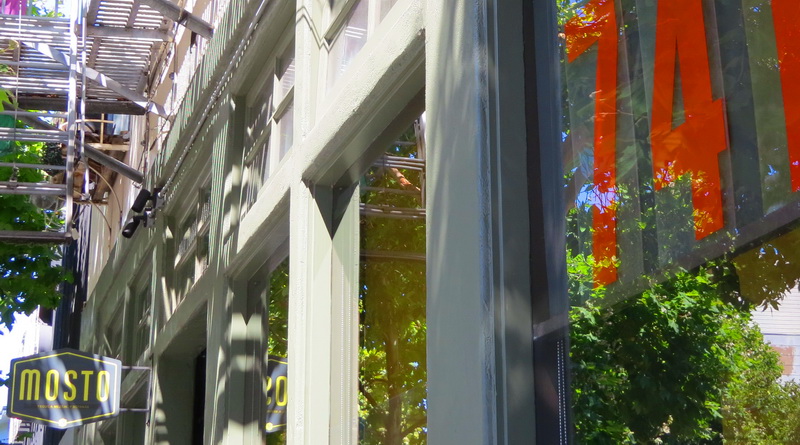 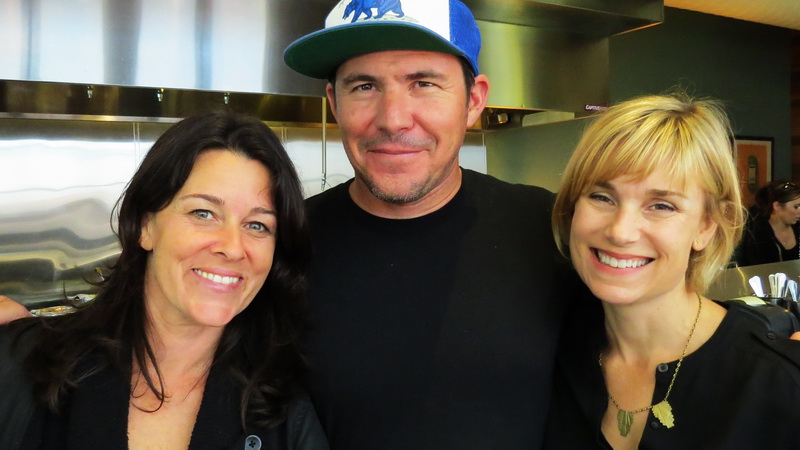 We strolled to Valencia Street and into the subtle Mosto / Tacolicious digs. The Mosto tequila bar opened last year as a new focus for Joe Hargrave and his partner, writer and marketing pro, Sara Deseran, after the success of Tacolicious (three locations in addition to the Valencia Street space.) The moment we stepped in from the Valencia sidewalk and past the subtle-to-the-point-of-missing taco sign, I knew this place was unique. 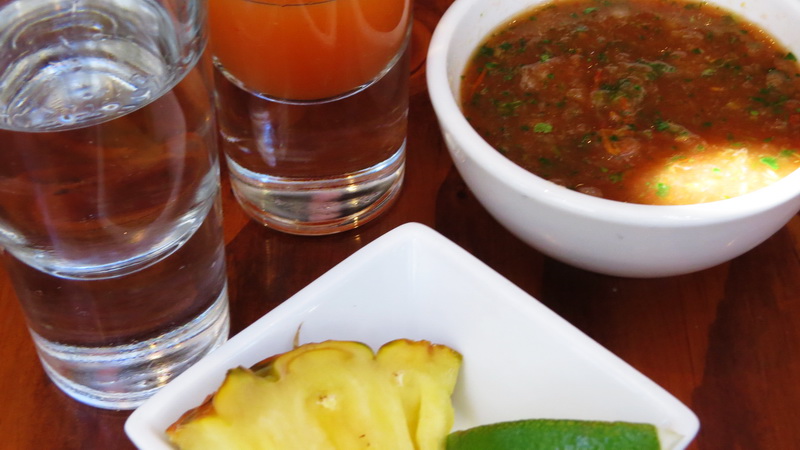 A patterned Mexican tile floor warmed the chic, open space. Large windows and a side patio were open to the mild Mission micro-climate. Once we sat at a tall booth, a steep shot of the smooth, house Jimador Tequila appeared next to a matching portion of fresh Sangrita. That afternoon’s batch was a spirited melange of tomato, chipotle and habanero pepper salsa. Small, succulent taco plates featured fresh tortillas from La Palma Mexicatessen, another San Francisco treasure. We surely weren’t going hungry. 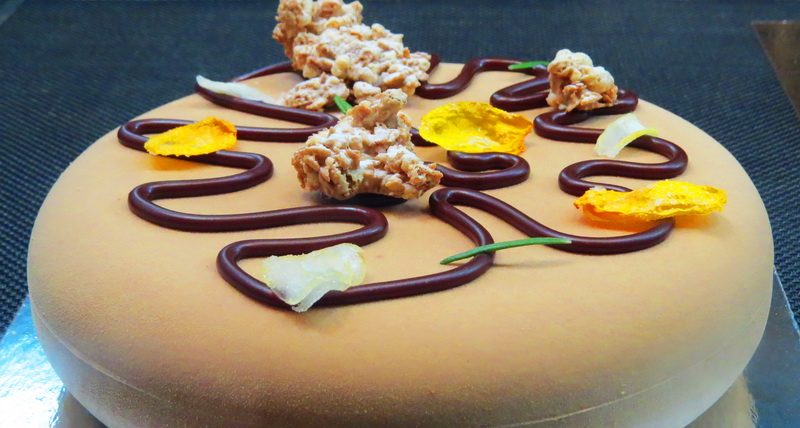 Inside the Craftsman and Wolves patisierrie case

Across the street in a low lying, re-purposed autobody repair building with stunning brick bones, sits Craftsman and Wolves. The CAW location is one of three in the city. In a case that could display jewelry, curvacious confections waited emancipation. Each was a work of subdued, edible art.
.
Lisa introduced me to the signature pastry, The Rebel Within, sliced open to reveal a soft-boiled egg within an asiago, sausage and green onion bun. The skill it takes to place a peeled egg within the dough and cook all to perfection is a testament to owner Chef William Werner’s tenacity. His expertise and commitment flow from over 15 years working in fine restaurants on the East and West coasts. The ‘contemporary patisserie’ is named with a nod to predatory challenges often facing those dedicated to craft. It appears that he’s winning the battle. 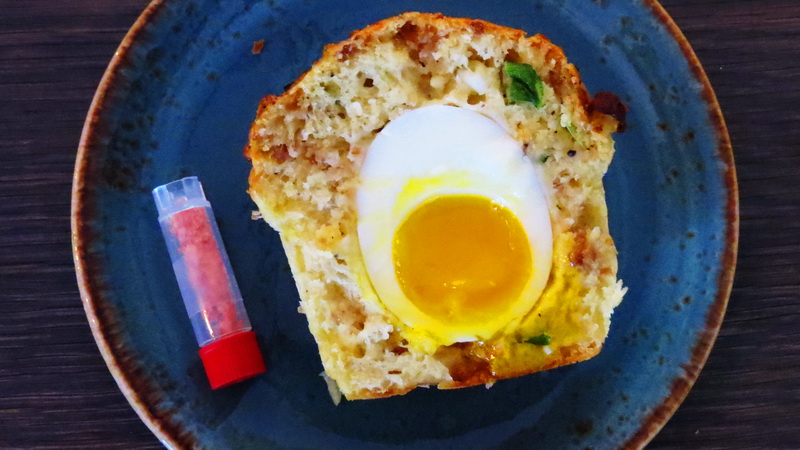 CAW signature bun – The Rebel Within – served with a vial of tabasco-infused salt!

Two doors down is a wonder that would inspire Willy Wonka – the bean-to-bar, small batch chocolate factory, Dandelion. Begun by a pair of intrepid chocoholics, Todd and Cam. They’ve grown their own cacao plants and roasted beans in home ovens, then toured major chocolate factories around the world before opening Dandelion in San Francisco.

Today the company roasts and grinds a batch from one farm or cooperative at a time, creating distinctive chocolate bars with fine-tuned discipline. We watched the process, and tasted from their cafe before walking on. 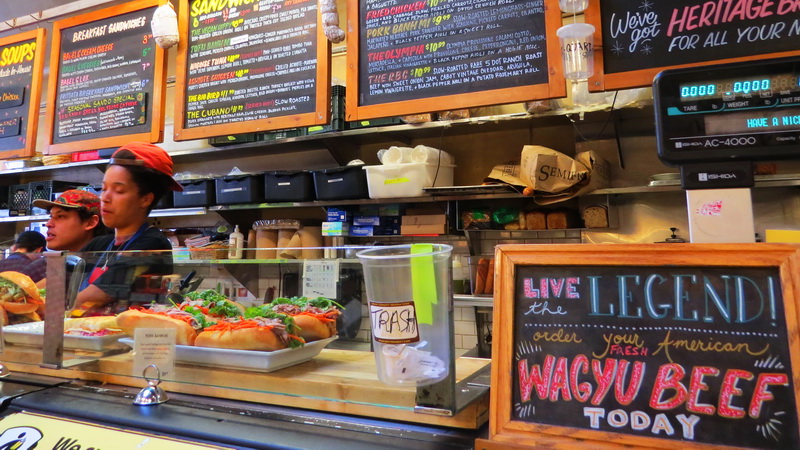 Dinner counter inside the Bi-Rite Market

Vistiing Bi-Rite deli and market brought us full circle. The Italian deli has been serving the neighborhood for decades and Lisa often brings home dishes from the dinner counter, which opens daily at 4:30 pm. With art deco signage, the market opened in the 1940’s and has been run by the Mongannam family for nearly sixty years. Brothers Raf and Sam took over from their father in the late 1990’s, instilling a chef’s aesthetic to the small market and stocking the highest quality ingredients. Now lines form at the counter for the Wagyu beef, imported sliced cheeses and much, much more. That’s where I left Lisa as she ordered entrees for her family. 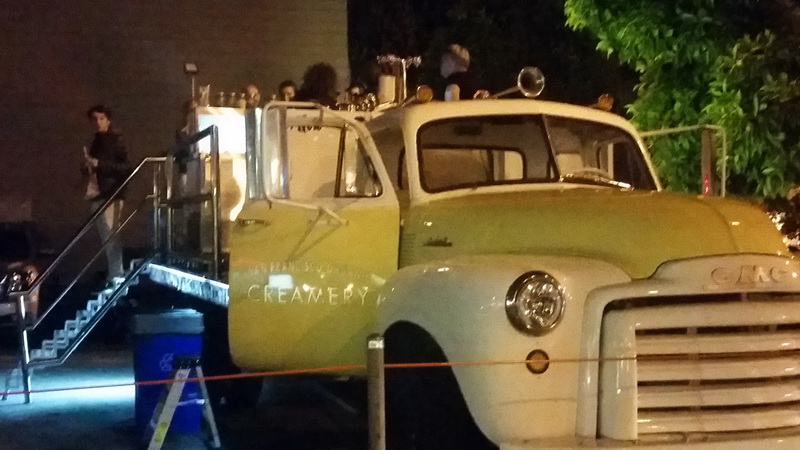 Valencia Street buzzes around the clock. One night, searching for local food desserts, my son ordered goat milk and berry ice cream off a vintage, yellow fire truck. Parked in an empty, corner lot, the San Francisco Organic Creamery truck and it’s menu, was a world away from the industrial strength food trucks I’ve seen elsewhere. 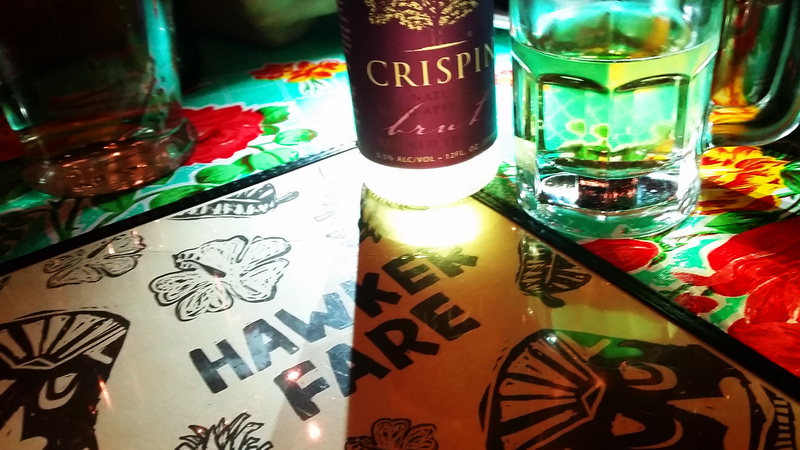 We also ate Issan Lao food at Hawker Fare, sipping tart hard cider, a simpler choice for dinner than one of their Tiki-inspired cocktails. They looked fantastic, however. I’ll just have to return and explore the upstairs bar menu next trip.

Another evening I slid up to the bar at Dosa and slowly cut into a paneer and pea filled chick pea ‘crepe’ between sips of Transylvanian white wine. A young man sat across from me and ordered the $44 tasting menu. For himself. Before drinks. On a Monday night. The neighborhood has certainly turned. It’s gotten to the point where regulations are being placed on preserving Legacy Businesses and limitations are being proposed on the number of new restaurants or bars. 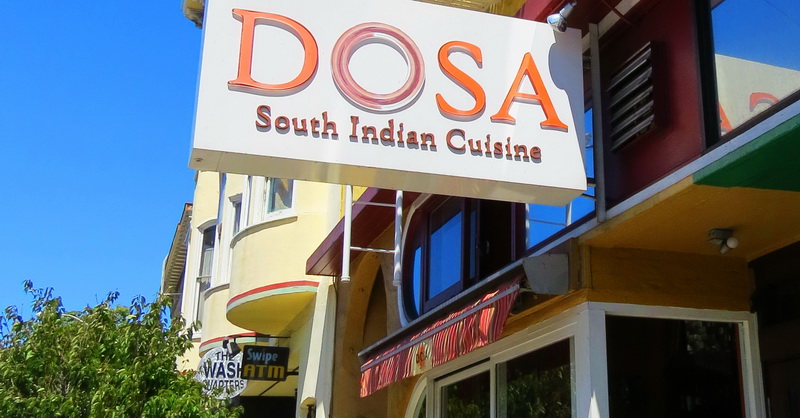 Lisa will keep savoring the old and supporting the new. Her local food tours and Edible Excursion’s motto is: Eat. Walk. Enjoy. Repeat. I did happily until my feet were sore and my jeans were tighter.

If you’re hungry for delicious, local food in the Valencia Street area: 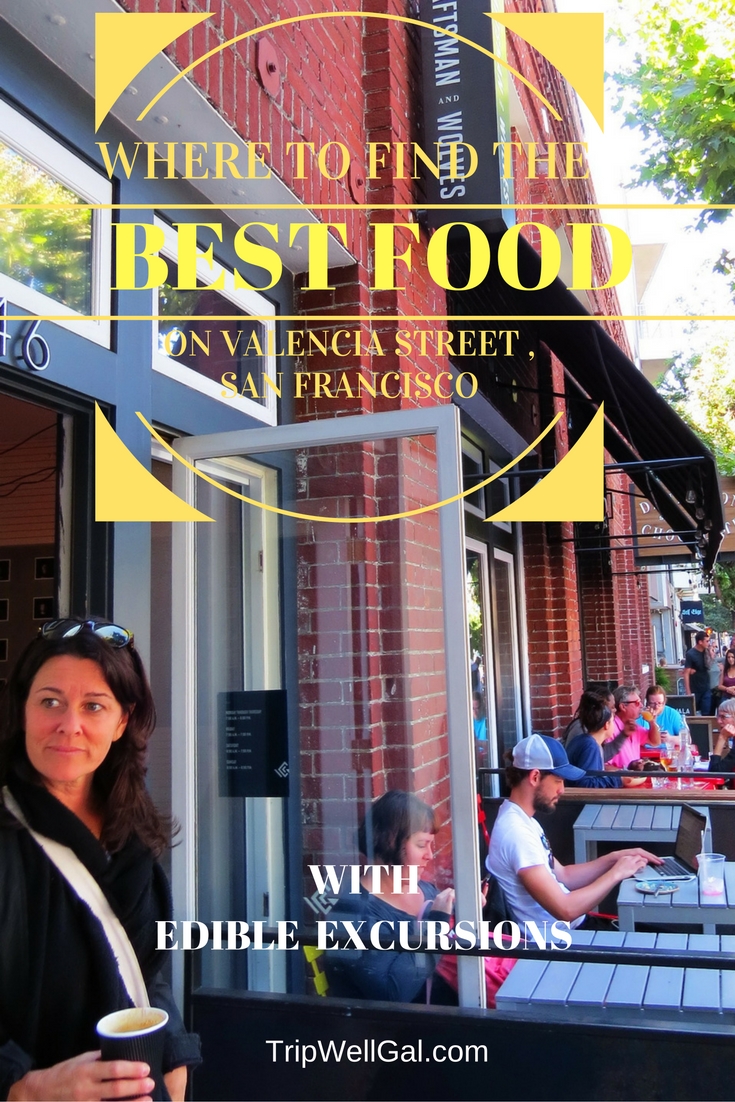 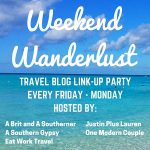 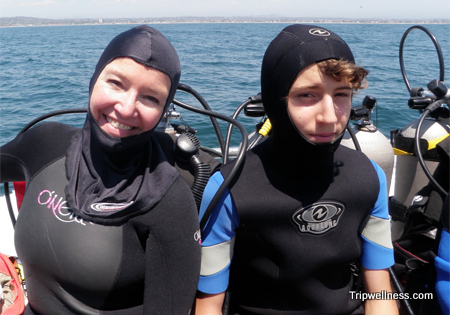 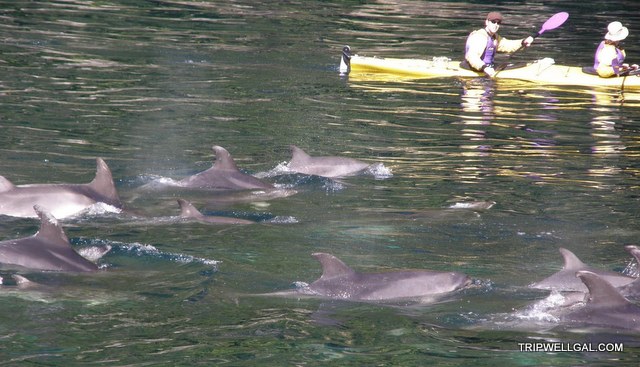 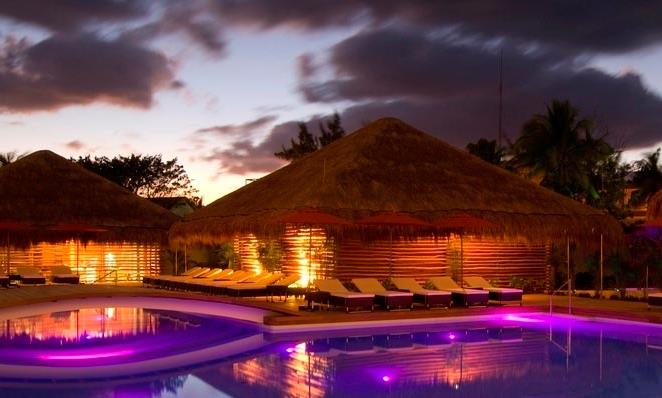 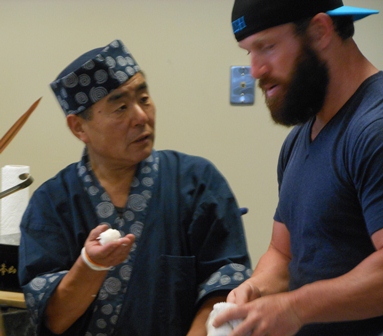