New Zealand: Sushi on the shore of a turquoise lake 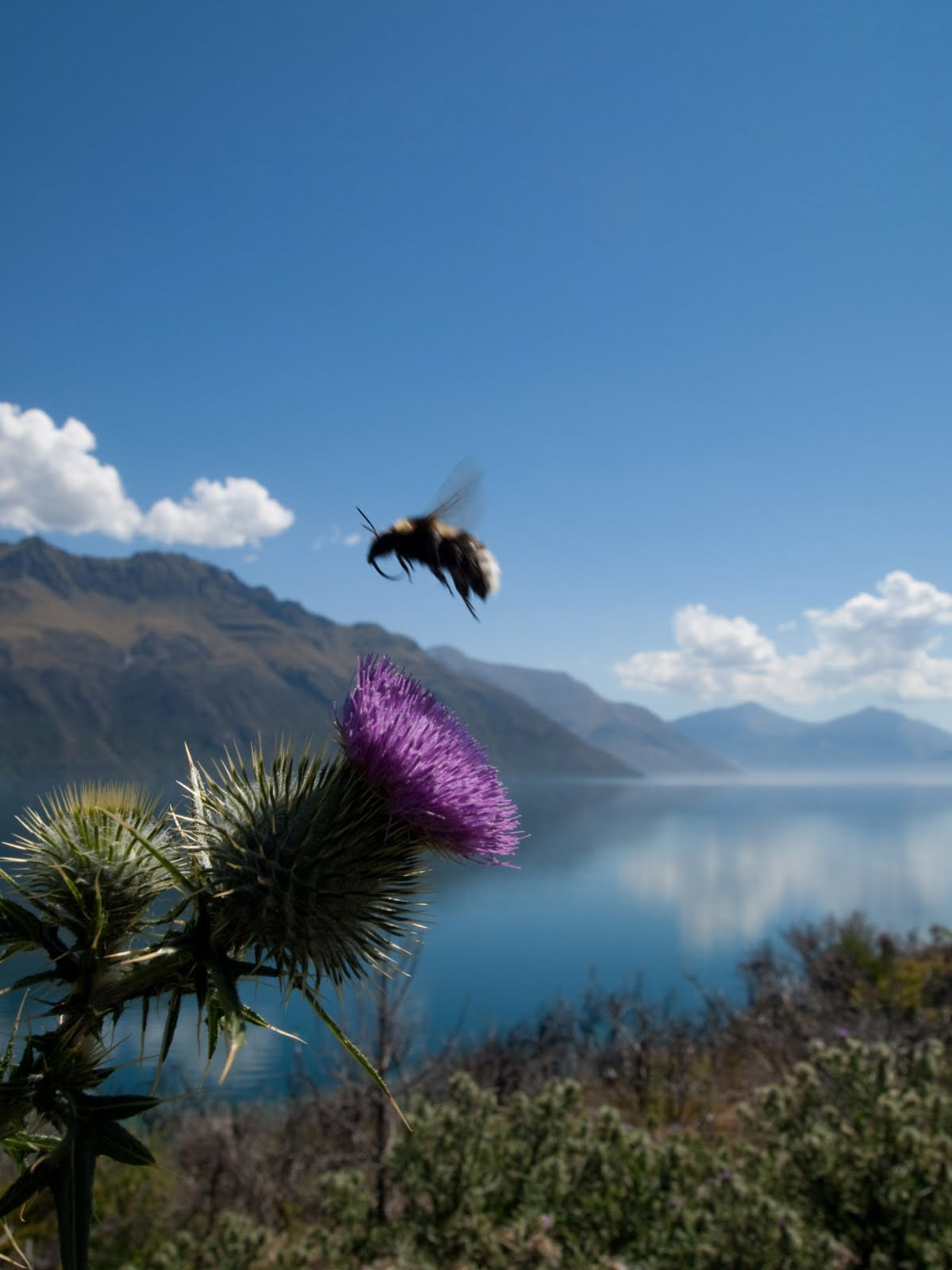 It’s amazing how quickly you can leave the urban crowds behind in New Zealand. 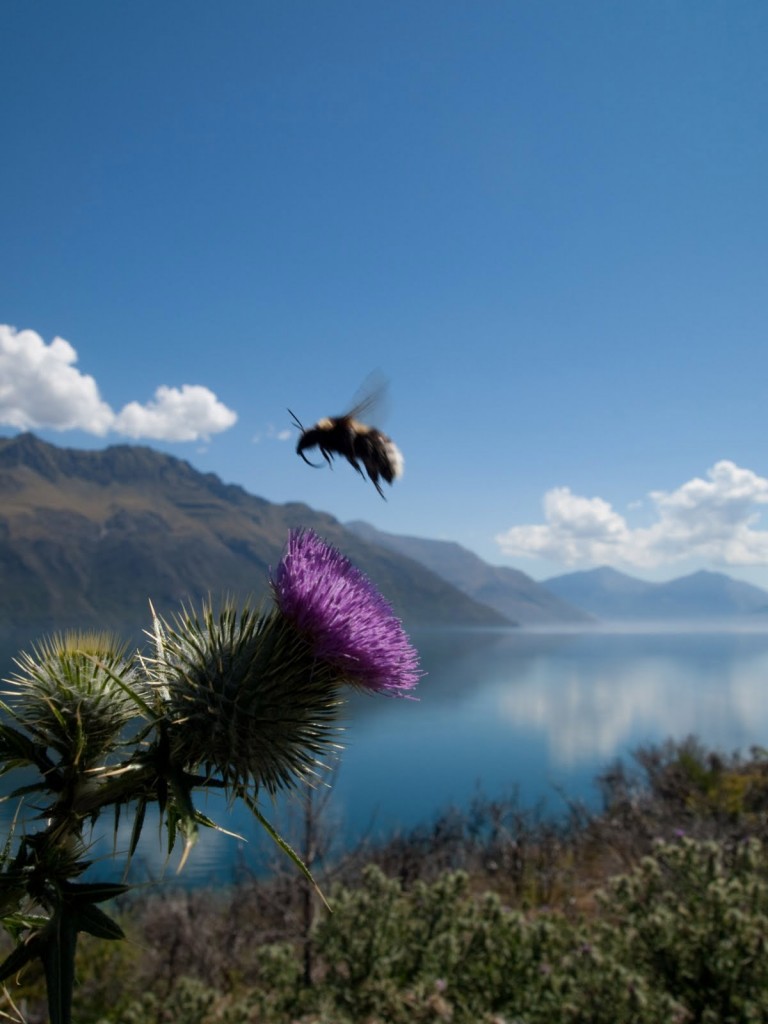 When we drove out of Christchurch, it wasn’t 15 minutes before there were wide, verdant fields full of munching sheep, the odd deer farm, llamas and cows. I’ve come to a keener appreciation of cheese and sausage they make possible, as some of the best is made here. More on that later.

We drove across the plains and up into the hills on our way to Mt. Cook. The rolling farmland is almost cartoonish – so green, with perfect Austalian beech and thick Cypress trees. Perfectly ‘bucolic’ I told my car mates, and that’s not a word I get to use often in crowded, dry San Diego. Up we kept climbing, each valley different in vegetation. My favorite? Landis Valley, its hills dotted with tussocks of spiked grass.

Lord of the Rings in New Zealand

Winding on through another valley and another, we traveled until we were deep into Lord of the Rings country. Many of the scenes were filmed in New Zealand and I can easily imagine James Cameron standing alongside his assistant, exclaiming ‘Yes, we can set the camera here, and here, and here’. If one’s inclined there are even guided tours of the locations from Queenstown.

Over one rise we were startled by a large, opaque bright turquoise lake. While two went down to touch the water (clear at the shore and warm), two of us walked into the Kohan Restaurant. It’s hidden behind the storefronts at the shore of Lake Tekapo. If you go there and see a lot full of tour busses, you’ve found it. Normally I wouldn’t choose dining with dozens of other tourists but this was a treat. We ordered Bento boxes and miso soup while debating whether to do a ‘take away’ picnic lunch for a picnic. It was very warm and the air conditioned dining hall with huge picture windows won out.

There I got my first glimpse of Mt. Cook, the highest peak of the Southern Alps, snowcapped and surrounded by dark granite neighbors. After lunch we traveled alongside the lake for over an hour until we reached Cook village and our stop for the night at the Hermitage hotel. This is the site from which Sir Edmund Hillary trained before climbing Everest. From the hotel deck you turn left and look up into snow fields and hanging glaciers. Ahead framed by lower peaks is magnificent Mt. Cook. 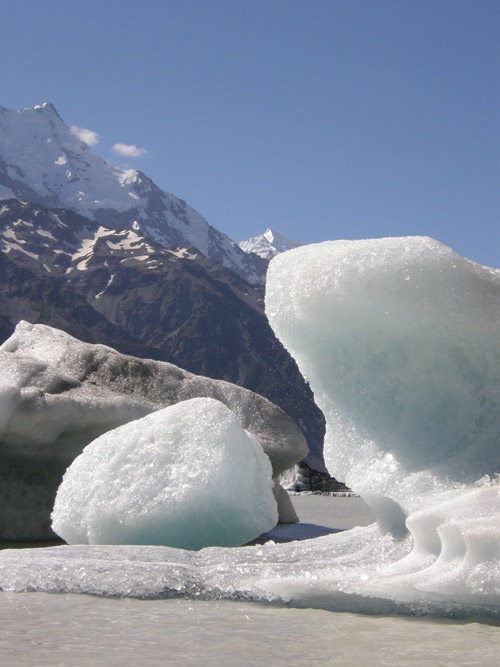 The lodge was large and full of tourists. We had a small apartment in the ‘Motels’ next to the staff with a killer view to the peaks where we sat on the patio for sunset (around 9 pm). Not much wildlife here as the New Z. islands are pretty remote, but I did see a small, brown Stoat bouncing through the grasses outside our room. The Stoat was imported at one point to help control the imported rabbit population but favored the local birds and reptiles. Same with the Possum, which is a major road kill victim. Goodbye to most of the native ground dwelling birds, which are now tenderly sustained in refuges.

One of the lures of the lodge is a chance to touch icebergs in Tasman Lake. The following morning we took a brief van ride to the edge of the milky lake and while there pulled alongside one iceberg as it rolled over. We crunched on 300 year old ice and gawked at the scooped surface of the glacier. The water is murky because of the ‘rock flour’ released as the glacier melts. Boulders lined the shore and the smaller rocks have been ground into this flour which then pours into the Tasman Lake, along the river and into the Tokapi Lake in New Zealand. Its brilliant turquoise is due to the finer particles reflecting all but that blue to our human eyes.

High times in the Tokyo Skytree

Where to find the best places to eat in Oceanside