How to make your Palau holiday a responsible vacation 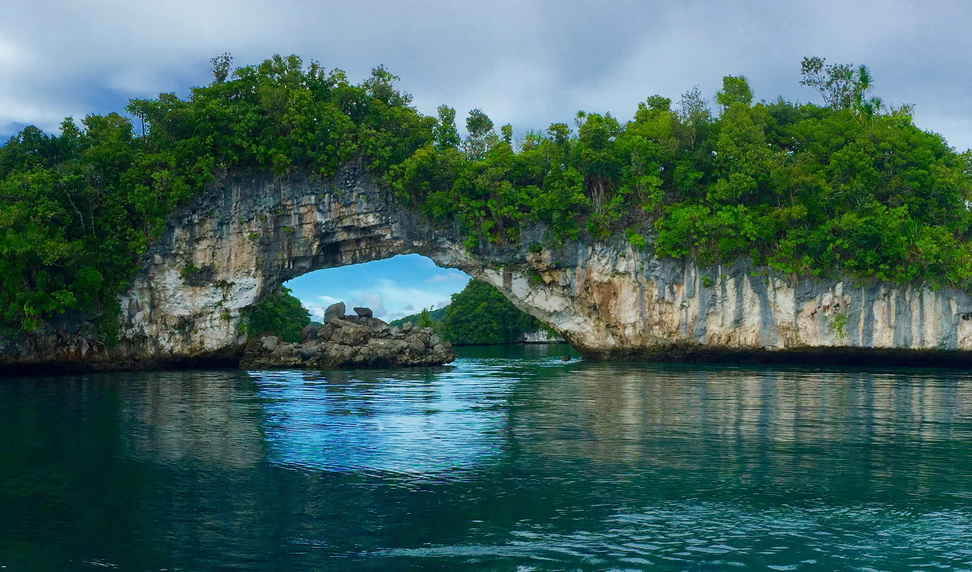 Vast clear blue water, schools of candy-colored fish and friendly turtles – I thought the first-day scuba diving on my Palau holiday was about perfect but perfect got better. On the way back to our hotel, the drone of the boat motor and a warm wind had me dozing but then I opened my eyes to an inland waterway unlike anything I could imagine. The Rock Islands of Palau’s Southern bay are a UNESCO World Heritage site for good reason. They are other-worldly, unique and endangered. Tufted rocks jut up from bright blue seas. Caves and arches invite boats to come close. There are few sandy beaches but captains know where to find them and since scuba diving or snorkeling Palau is so popular, the number of captains is regulated. 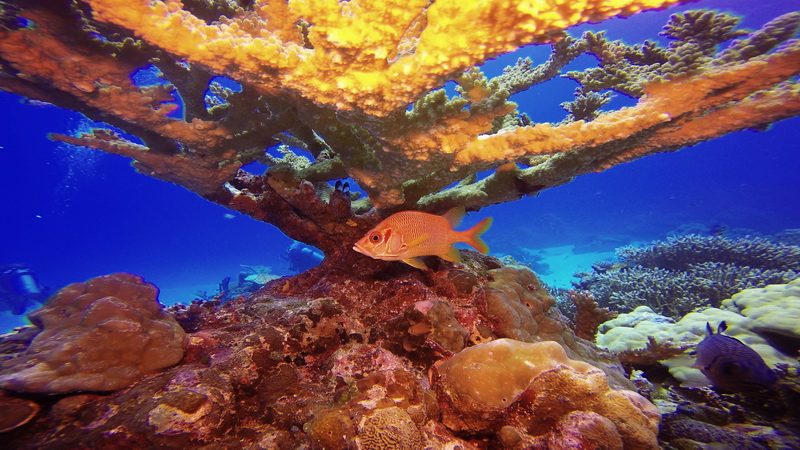 There’s so much natural beauty to enjoy on a Palau holiday. Only ten of the 200 islands are inhabited. The remote chain is relatively close to Asia, which made it important strategically to the Germans and Japanese in World War 1 and 2. Now the island nation is a Presidential Republic and freely-associated with the USA. Trading beads were once the currency but it was easy to use US dollars on our Palau holiday. It’s now the official currency. While there is some commercial fishing and agriculture, the economy relies heavily on tourism. 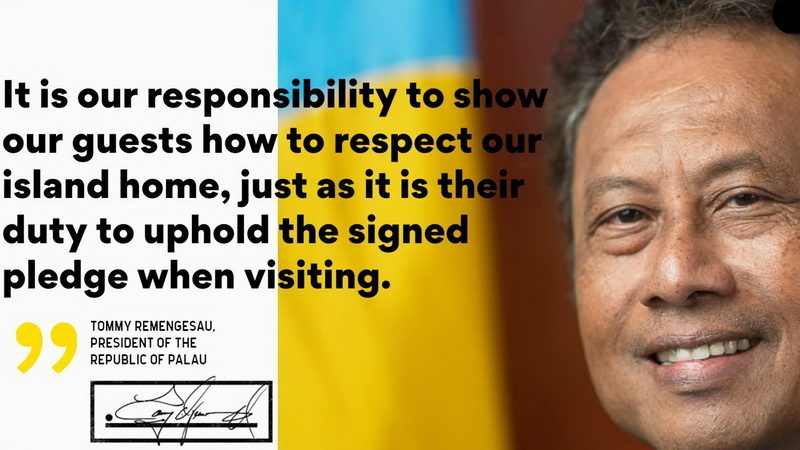 The people of Palau are being overwhelmed. With a population of less than 20,000 and over 160,000 visitors who fly or cruise in each year, resources are wearing thin. Most tourists come to see the Rock Islands, to snorkel and scuba dive in the rich waters. The impact has alarmed Palauans enough to start a campaign and the Palau Pledge is the first of its kind in the world. Palauan children helped craft a new passport stamp and every international visitor pays a fee for the stamp which they must sign. Go against the pledge and you’ll risk being fined up to $1,000. My Palau holiday began in Los Angeles but I arrived a few months before the stamp was available. Arriving bleary-eyed in the middle of the night, I wouldn’t have known what I was signing but the words still align with my mission to be a responsible, ethical traveler (See the illustration below.) 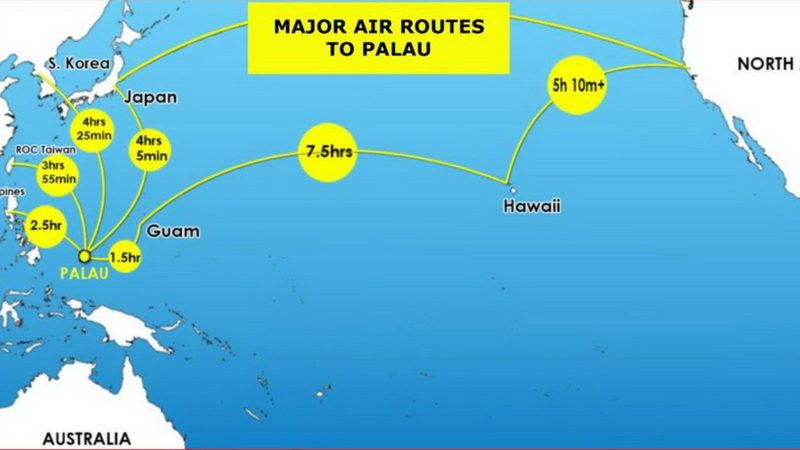 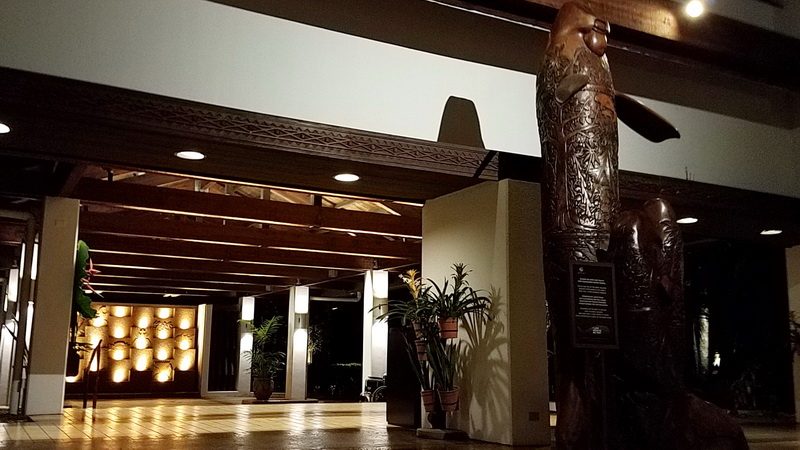 Our airport shuttle brought us through downtown Koror to the Palau Pacific Resort. It’s about as luxurious as they come. The next morning we took a boat to the town dock and checked out gear at Fish and Fins dive shop. The rest of the week unfolded into days of diving and exploring the passages of the spectacular Rock Islands. 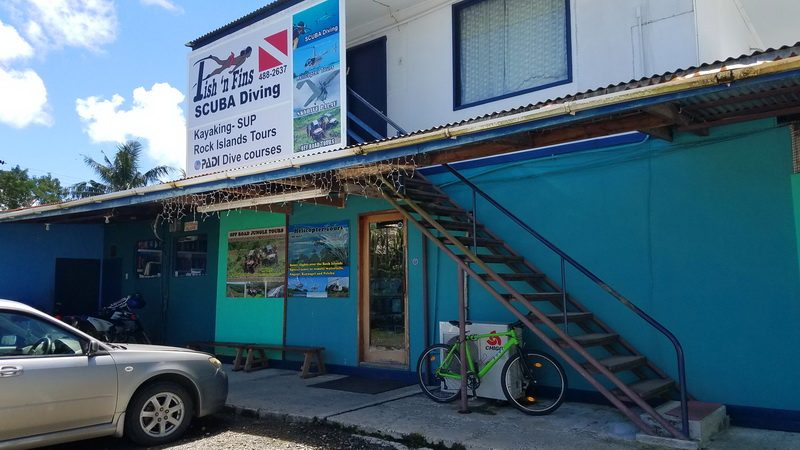 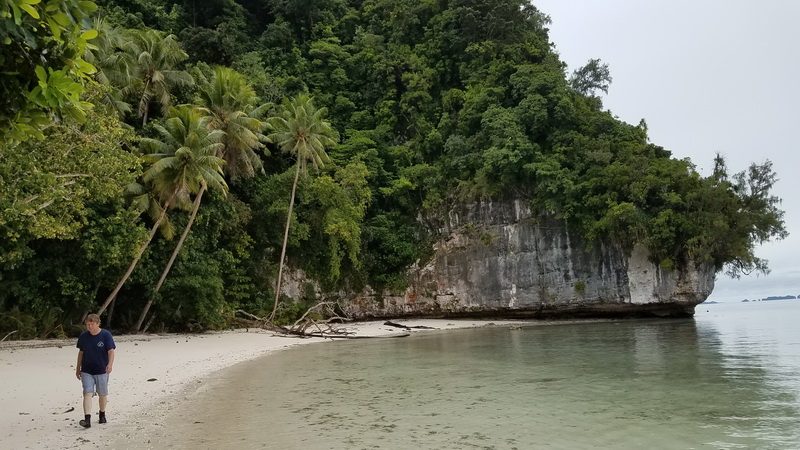 Between dives you have to allow inert gases to release and that means waiting topside for close to an hour before jumping back in. During decompression stops, we would have a boxed lunch on the boat but one afternoon the captain pulled up to a sandy, shaded beach.  One season of the Survivor series was shot on the island but I didn’t have time to take the trail into the jungle to investigate film sites. There are still a few remnants – a handful of picnic tables, a fire pit, and a latrine. The island was beautiful with tropical birds, rock cliffs and a chance to watch other tourists who came in and out to visit the beautiful jungle spot and swim. Uulong is part of a responsible vacation as everything is packed in and out for visitors. 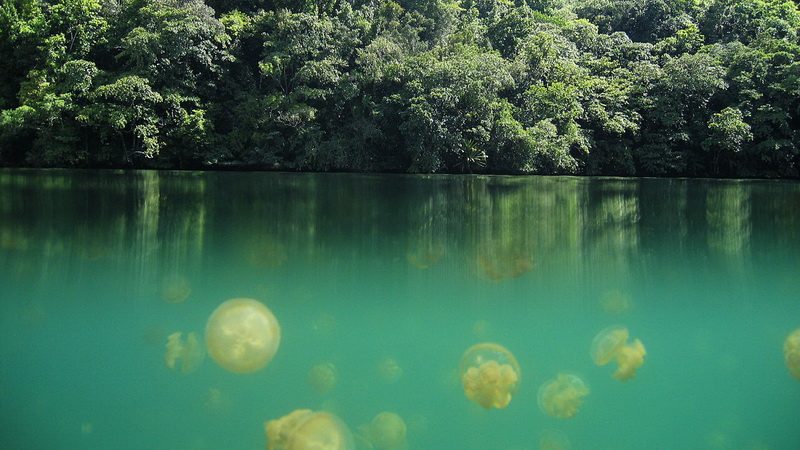 No more swimming with Jelly Fish

Once it was possible to swim with the strange, sting-less jellyfish trapped in Palau’s interior lakes but El Nino conditions over-heated the water, killing the most spectacular jellies. Once the landlocked jellyfish floated up from the depths to the surface. I so wanted to be in the water as they emerged around me but it’s not likely to happen in my lifetime. Today you can still hike around the lake but no swimming is allowed. 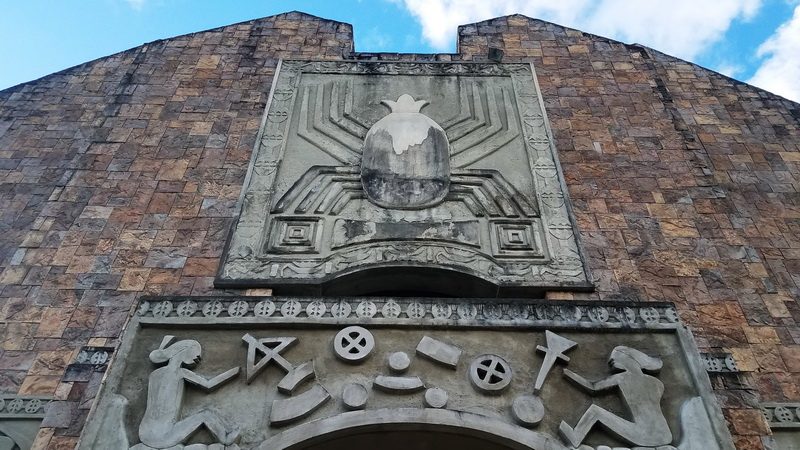 Front of the Etpison Museum in Koror showing one creation myth

After a few days of diving, we checked into the Garden Palace Hotel near the main street of Koror. The goal was to get out of the resort bubble and dip into the culture. I definitely recommend the Belau National Museum which wasn’t far from our hotel but given the heat, I wasn’t comfortable walking. Surprisingly, the museum offers rides to guests on weekdays from 9 am to 5 pm. Large groups are shuttled depending on vehicle availability.

The museum is a cool refuge from the tropical heat with several floors full of information about the first German settlers, plus Spain, Japanese and US involvement. There are also displays of clothing and uniforms.The museum grounds host several Bai buildings, which are traditional meeting halls for the local chiefs. The beams and doorways are covered in intricate carvings that show legends and lessons in a horizontal sequence. I was fascinated by smaller storyboards with similar carvings inside the gift shop. Their story is also fascinating. 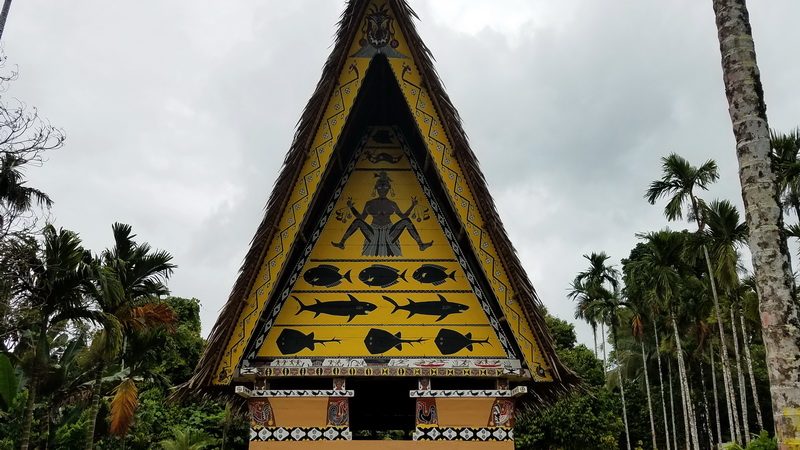 Bai Artwork on a Palau holiday 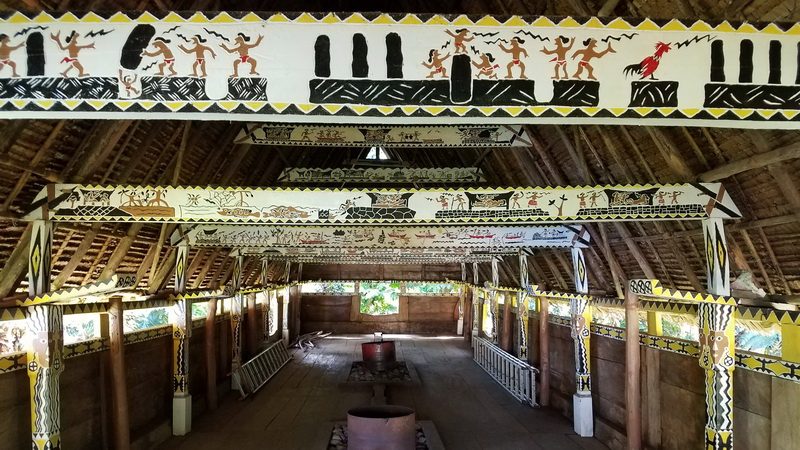 Inside a Bai Tribal House on a Palau holiday

In 1935, Hisakatsu Hijikata, a Japanese artist and ethnographer wanted to revive traditional carving which was in decline. His students adapted the ancient styles and today local artists have developed their own. In the 1960’s, a jail vocational program was offered to interested carvers. I found one of those small boards in the museum and it fit beautifully into my suitcase. It means much more to me than bringing home pirated shells or imported souvenirs. 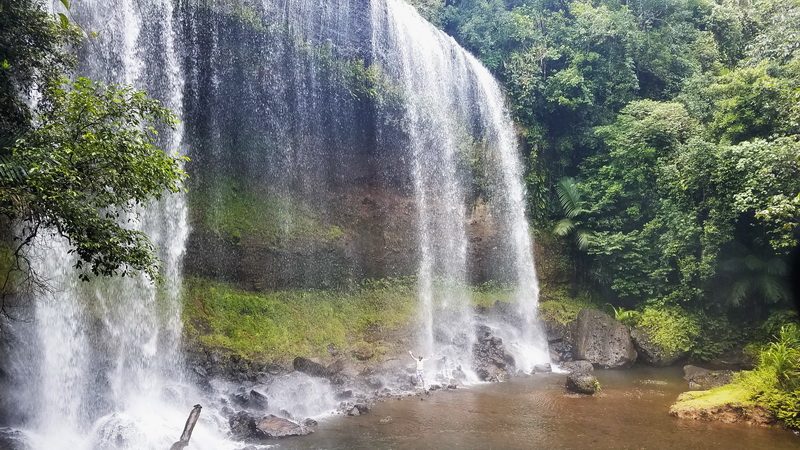 Ngardmau Waterfall – Can you spot my dive buddy in the cold water at the base?!

We rented a car for one day (most have the steering wheel on the right side!) and took off to explore Babeldoab Island. Our dive shop friend, Tova pointed us to one of the largest Bai buildings. Ngardmau waterfall trail delighted other friends. It was a treacherous hike in and out after an overnight rainstorm but given the right gear, the falls are worth seeing. At the far end of the road are ancient carvings similar to those on Easter Island and we marveled at the beautiful architecture of the Capital Building. The road around the island is well maintained and simple to drive. I recommend crossing into the interior to see more agriculture and village life. If you can take the time, find a guest house and make it an overnight trip. 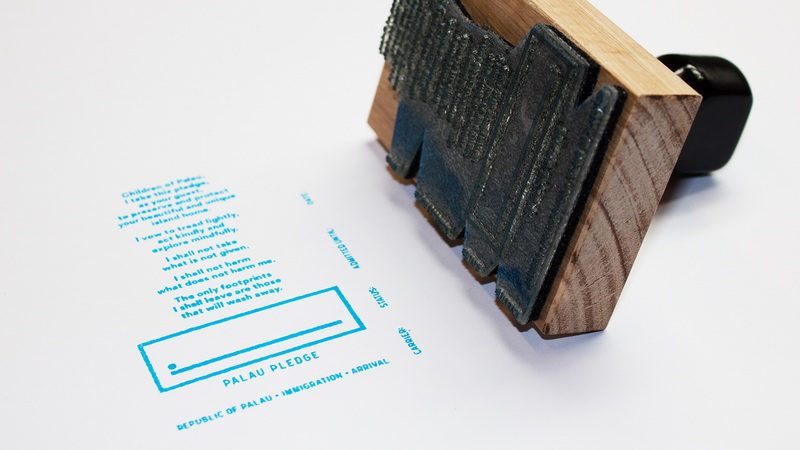 Here’s one stamp I want for my passport! Palau is working hard to protect its natural resources with the Palau Pledge Stamp and it’s offered in several languages. It’s a unique way to remind us to be conscious travelers who behave ecologically responsibly while on the island.  The Pledge promise: 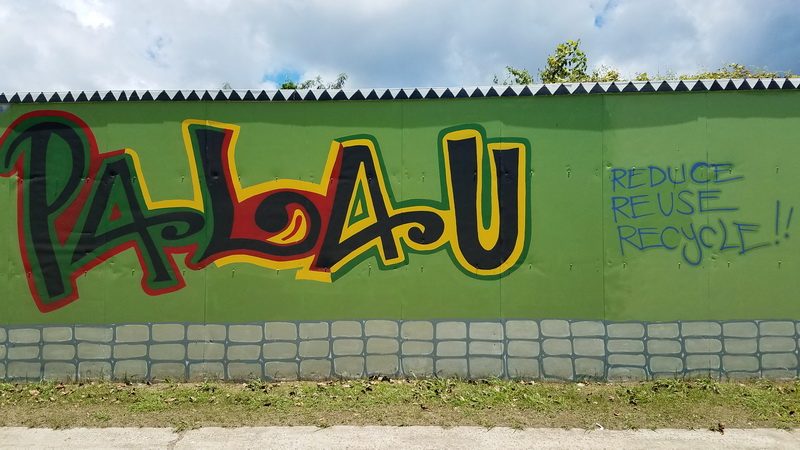 You can sign the pledge from your computer anywhere in the world and help save the island nation’s natural treasures for the children of Palau. This tiny island nation’s initiative will have a huge impact on other countries and help preserve the world for future generations. 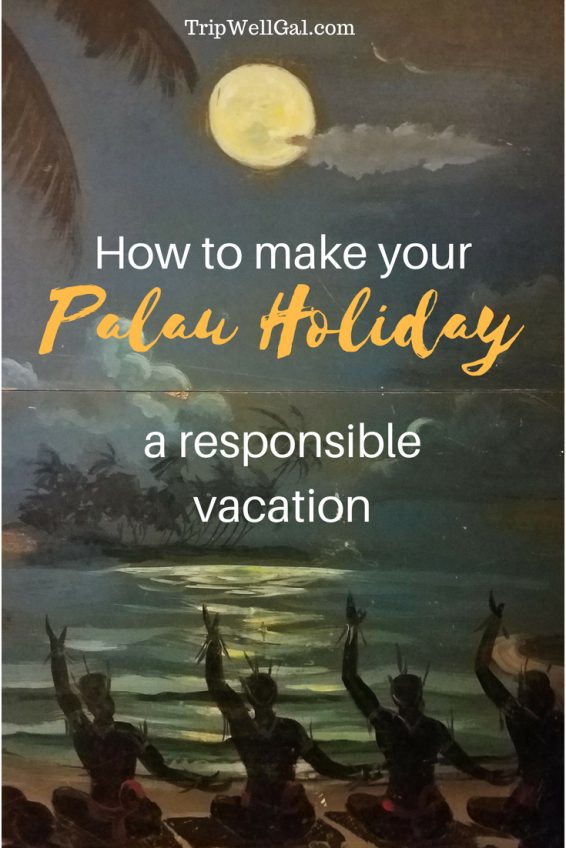 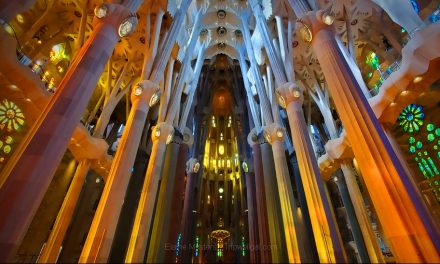 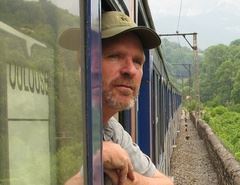 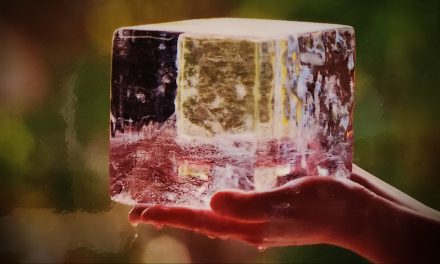 How to Enjoy Tokyo’s Cocktail Cubes Culture at Home