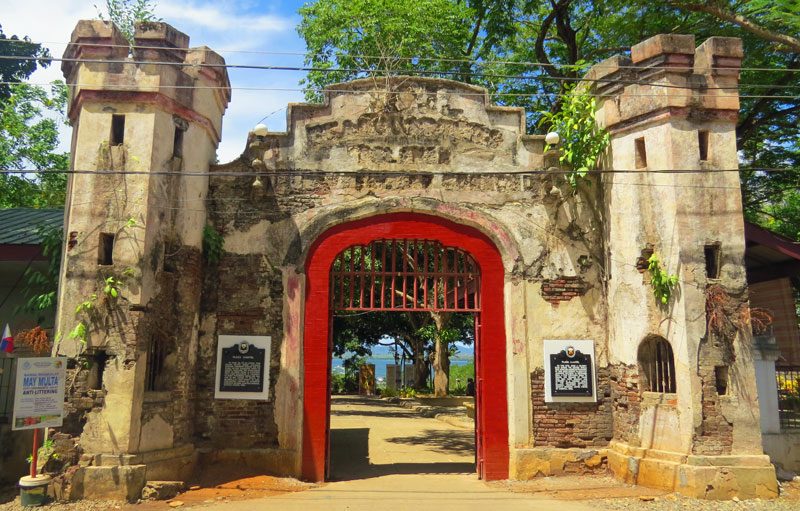 Arch in Plaza Cuartel not far from the war museum

“History ought never to be confused with nostalgia. It’s written not to revere the dead, but to inspire the living.”

~ Simon Schama, A History of Britain.

War is cruel yet it bears remembering and the Filipinos haven’t forgotten those who fought for freedom. I didn’t expect to learn about my country’s history on the Philippine island of Palawan but there it was, first stop on our City Tour itinerary – a visit to the Special Battalion World War II Memorial Museum. I had heard of the book, Ghost Soldier, and the 2005 movie, The Great Raid. Not being a military history buff, I wouldn’t have gone out of my way to see the museum, but it was a touching conclusion to the visit. I left Puerto Princesa glad to have seen the war museum, for our countries shared past, and hopeful for our future. 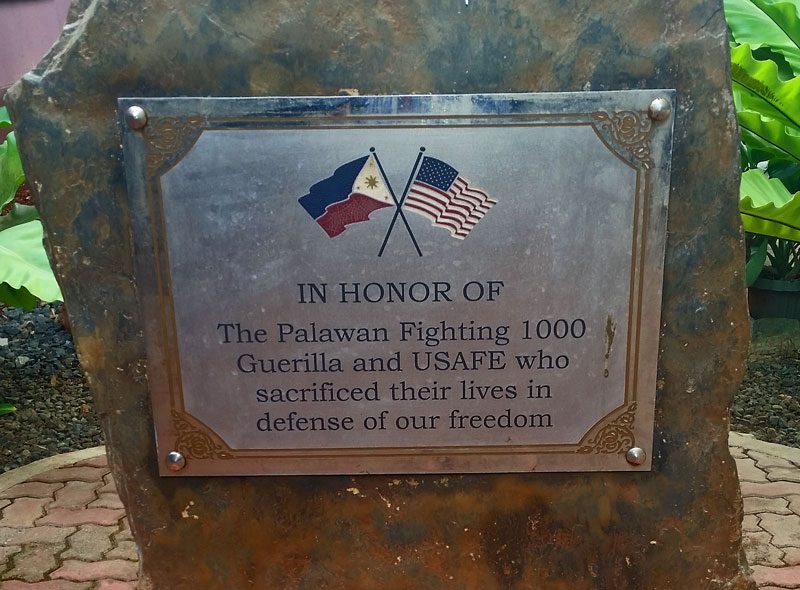 Plaque in the war museum

Inside the private war museum inaugurated by the family of local hero, Dr. Higinio Mendoza Sr., our English-speaking guide took us room-by-room, sharing quick details on the role that Puerto Princesa and the Philippines had played in World War II. American soldiers fought and died side by side with more than 1,000 Filipinos resistance fighters to secure the Philippines independence. I stood in the room given to the U.S. soldiers who served there, those who died in a war-camp massacre and death march that was unspeakably cruel. One wall of the museum held pictures of nearly a half dozen American soldiers who chose to stay in the Philippines, marrying into Filipino families. Their children remain and several serve in government offices. 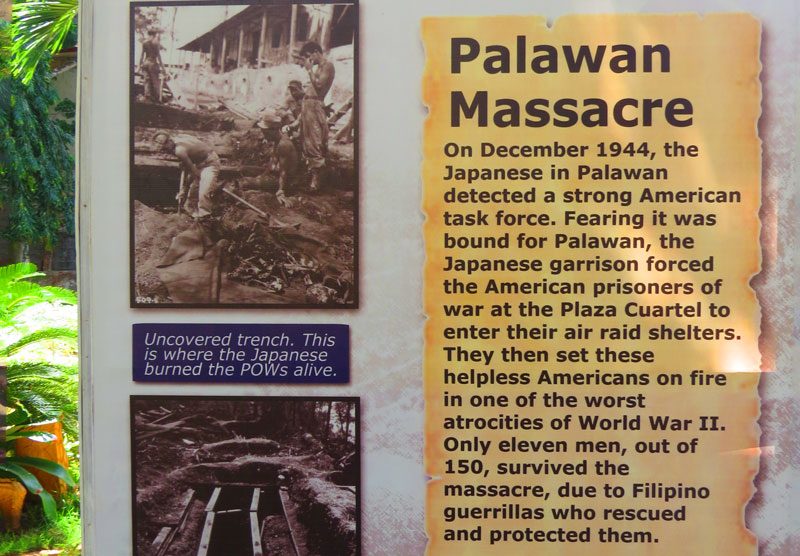 There were artifacts from all the players, recreations of uniforms and collections of arms. A picture of  triumphant statue was dedicated by one of the survivors and later we saw the statue itself when we ventured across town to the remnants of the Spanish fort at Plaza Cuartel. 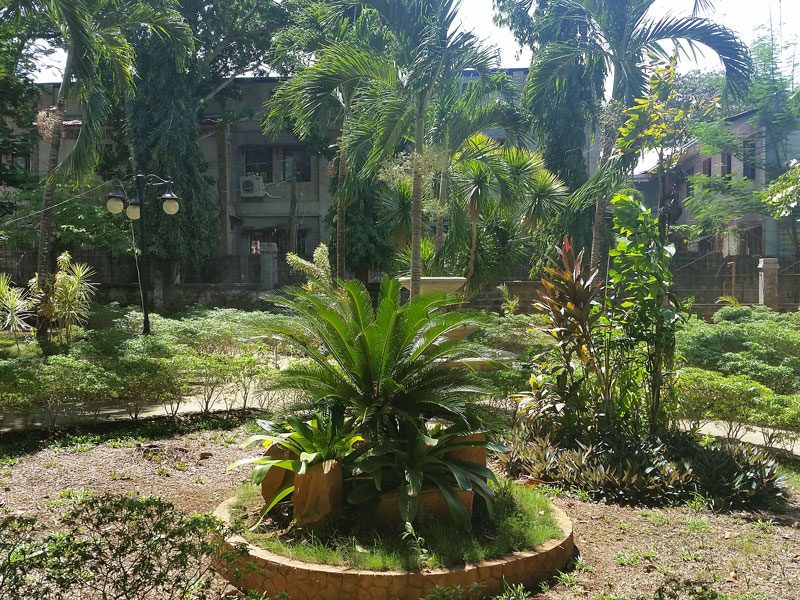 An archway and broken wall surrounded the inner, open courtyard with a clear view to the harbor. As I entered, a cooling breeze offered unexpected relief from the moist, morning heat. Fountains and sparse trees punctuated the space. A pair of young boys ran about and posed for pictures. Standing displays were set in the center and we read, moving silently from one to the next. Over 150 American soldiers were burned to death in that space. Many more, including hundreds of Filipino soldiers, died near Manila in the Bataan death march. Soldiers fought in Palawan, were wounded and lived on to tell the stories of the fight to secure freedom and a strategic stronghold for the Allies. 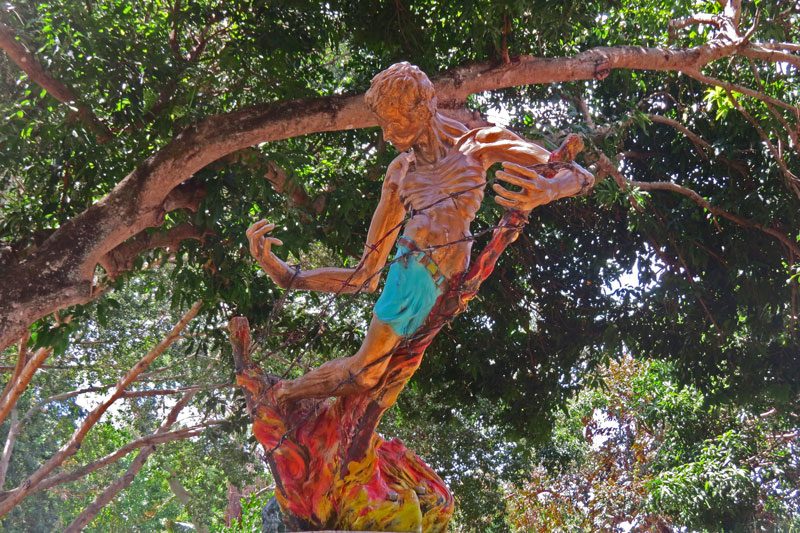 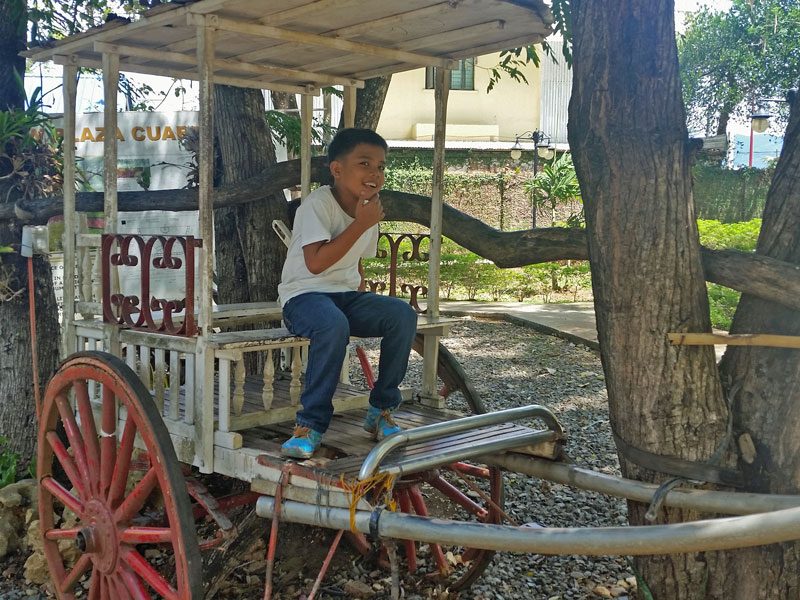 A sense of heartfelt amazement filtered into the day, the last of our visit in the Philippines. Our two countries remain bound in friendship and mutual concerns over current affairs in the region that again threaten decades of peace. I hope that we’ve learned from the past and can hold onto our national freedoms and that the world will find a way to coexistence without conflict. It seems a wistful, naive notion.

“Those who cannot remember the past are condemned to repeat it.”
~ George Santayana, The Life of Reason, 1905.

Over a century later Santayana’s message remains more true than ever. I’m grateful to our Filipino hosts for the visit to the war museum; for reminding me of our shared history and concerns for the future.

Many thanks to Philippines Tourism and to the Puerto Princesca Tourism office for all their assistance in planning this trip and the complementary tours. 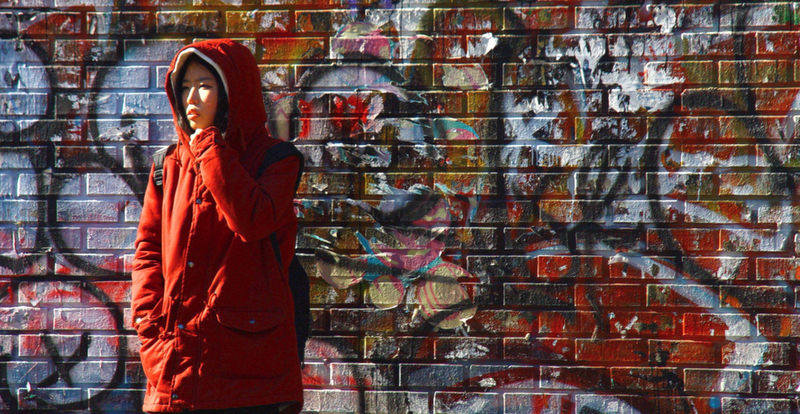 How to avoid eye strain when traveling and at work 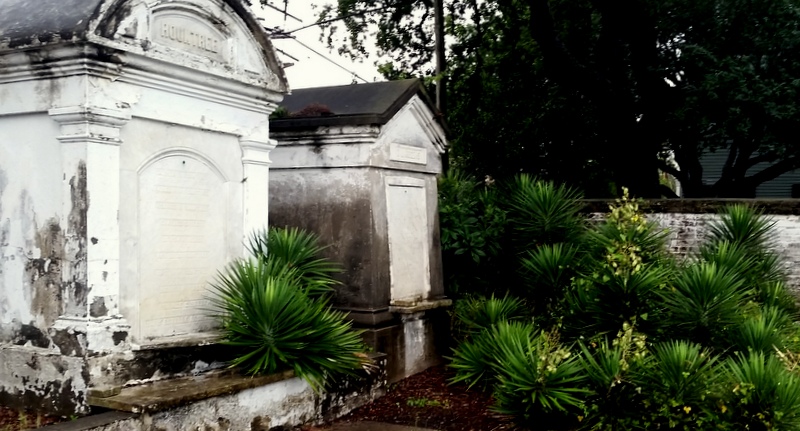