Relishing the Day of the Dead – San Diego style

Over the years I’ve been touched by different Mexican traditions and especially by the color and spirit of Dias de los Muertos, the Day of the Dead. Last year I walked in San Diego’s annual procession to the cemetery and marveled at the elaborate masks, costumes and decorations. But where did all this come from? 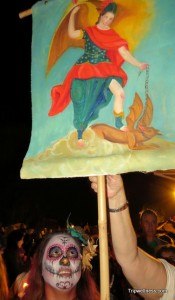 Procession banner in San Diego’s Day of the Dead procession.

In pre-Columbian times it was believed that once a year the recently departed were allowed to return to spend time with their families and loved ones. It was also a time to honor the life cycle, fertility and the future. Eventually the uplifting celebration became the Day of the Dead.

After decades of violence at the hands of Conquistadors and decimation of indigenous traditions by the Spanish Church, many Mexican people held firmly to the ancient rituals and their respect for departed loved ones. 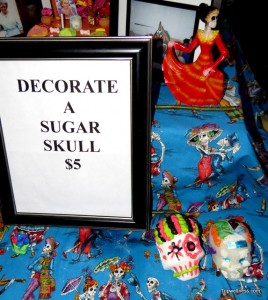 Decorate your own Day of the Dead sugar skull!

They also took advantage of the new plant their Spanish invaders imported to Mexico. While they might not have had much money, now Mexicans had lots of sugar and eventually sugar skulls became part of the tradition honoring the dead.

The Church relented their prohibitions and now, each November 1st and 2nd during celebrations of Dias de los Muertos, families 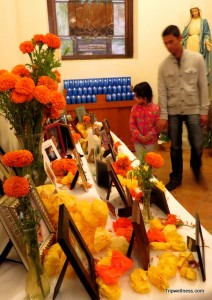 and friends come together to pay their respects at graveyards, in their homes and workplaces.

In Mexico shop windows are embellished; the cemeteries are tidied and decorated. Fantastical flower wreaths are created along with toys and figurines featuring calveras (skulls and skeletons) for the ofrendas (altars) in homes, markets and businesses. Favorite foods of the departed are prepared and Zenpasuchitls, a type of marigold, the traditional flower for the occasion, are found everywhere.

More recently the American Halloween tradition has pushed back with October 31st, significant to Druids and Celtics originally, that’s become a day filled with death and fear but the Mexican tradition has gained a foothold Stateside. 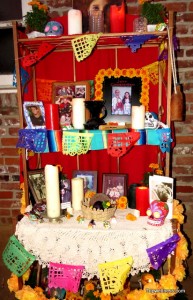 Day of the Dead altar.

Some see it as a reason to indulge in elaborate face painting, to dress up and drink, but at its core Dias de los Muertos considers the sweetness of death, the touching silence of remembrance – and I hope my oversimplification doesn’t offend.

In San Diego the holiday transforms historic Old Town district where the little cemetery is transformed with color and flowers, shops set up elaborate altars and decorations, restaurants and bars entice with specials.

As the sun descends costumes and faces covered in colorful designs fill a growing crowd. On the steps of the Cosmopolitan Hotel, a choir in black sings solemnly. 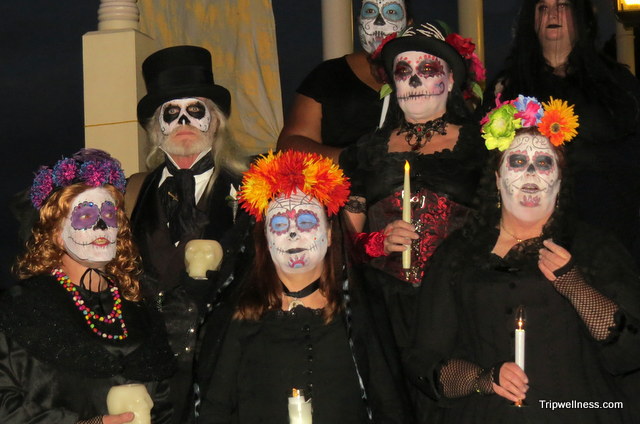 Day of the Dead choir.

The crowd grows and candles are passed out in anticipation of the procession to the cemetery. Finally, quietly marching forward shoulder to shoulder, the celebrants advance. Anyone may join in and the night I was there the hushed reverence, the anticipating buzz stirred my heart. Many carried small framed pictures of dead loved ones and I wished I had too.

For those of us distanced from our traditions and ritual, perhaps grieving or simply longing to pay homage beyond dropping a few flowers at a grave site, the Day of the Dead might bring a sweet closure or rekindle memory.

In Old Town, I noticed that many found the party at the Coyote Bar celebration enough or perhaps a way to drown memories. 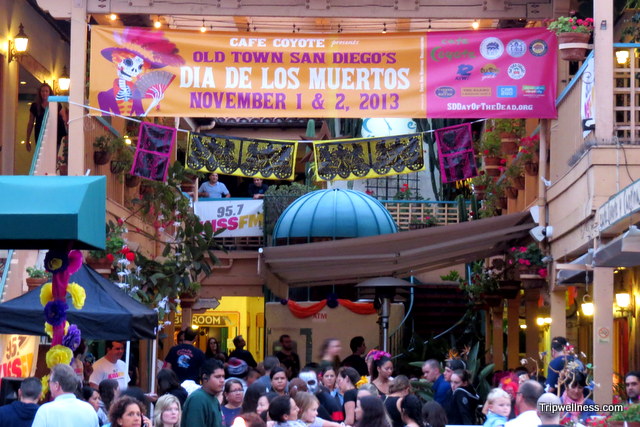 Coyote Bar and the Day of the Dead party.

No Day of the Dead in your town? You can still create a personal celebration:

Perhaps you’ll decorate a small altar with pictures and mementos. You can order small sugar skulls to decorate or make the traditional bread too. Here’s one recipe for traditional Pan de Muertos. 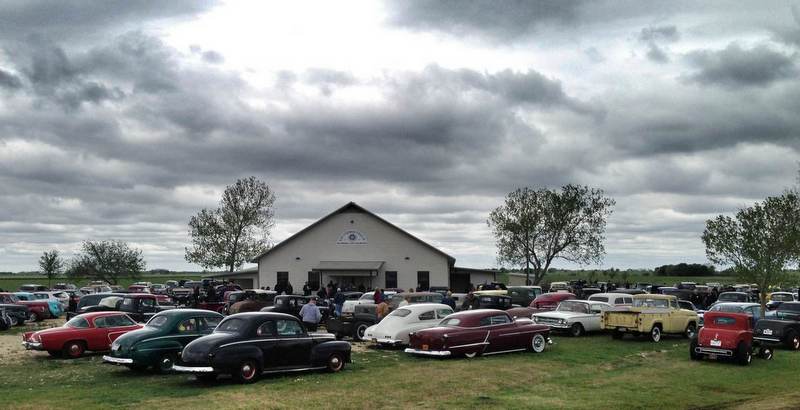 Hot rod culture in Austin – The Lonestar Round Up 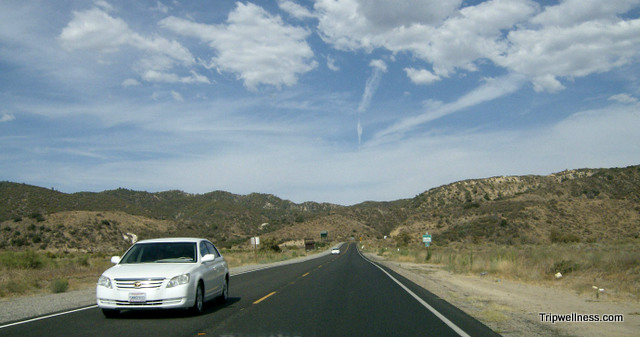 Planning a road trip holiday? You’ll have lots of company. 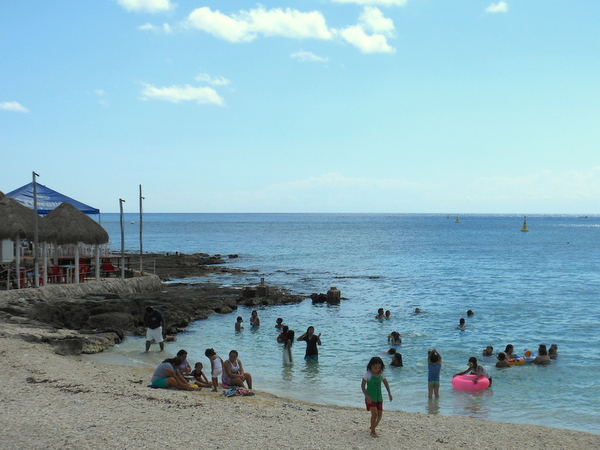 The perfect trip – How to have more holiday fun