Seasickness and Swimming with Sharks 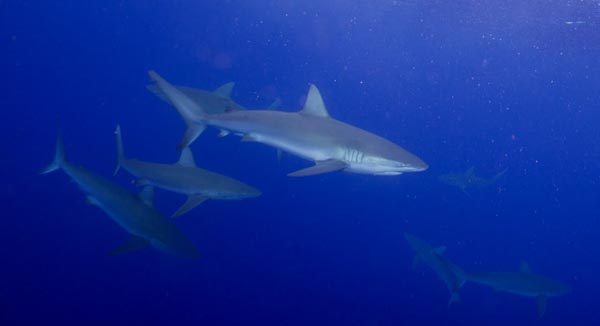 My son, Josh, gets seasick. It’s not news. I’m a diver, mad about it and hoped he’d share my enthusiasm for underwater wildlife. For years we’ve spent long afternoons out in nature, looking for spiders, birds, and snakes hiking through the parks and lagoons near our home in north county San Diego.

He’s become quite the filmmaker and when given an underwater camera at Christmas, I thought he’d be aching to get into the water. Underwater wildlife is easier to find and sometimes it finds you. His PADI certification was still fresh when seasickness became an issue.

It materialized on a rafting adventure in the sheltered Mission Bay, then later when we boated around the Pt. Loma lighthouse to scuba in shallow kelp beds. Josh was green before we dropped anchor. He felt better once in the water but it wasn’t fun. 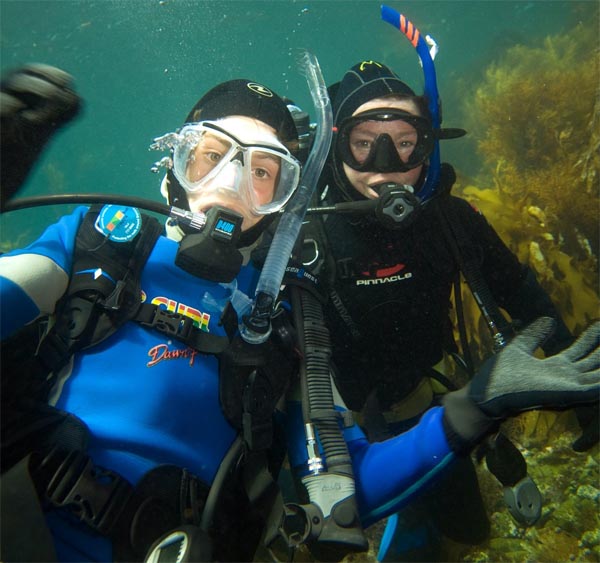 Josh and Mom off Catalina

The last time he suffered through my enthusiasm for local diving was on the ten year anniversary of the sinking of the decommissioned ship, The Yukon, at the entrance to the San Diego channel. I thought the water would be fairly calm there. We’d joined a group trip and tied to a buoy above the wreck, bundled up and dropped into the 52 degree water. After pulling ourselves down the bow-line, hand over hand, finally the ship materialized in the shadowy water. Josh was shivering within moments. I encouraged him to at least touch the deck and his eyes grew wide at the beautiful strawberry and white tasseled anemones covering the bow. Sadly after surfacing minutes later, he elected to forgo the next dive and spent the next hour green and nauseous waiting for the rest of the group to complete two dives.

Sharks and the open sea

We’d been planning a blended family trip to Hawaii for months. Large on the list of activities was a caged shark dive with Hawaii Shark Encounters.  I came prepared for seasickness. It doesn’t bother me most of the time, and with some research, I’d gathered ginger candies, homeopathic remedies, Dramamine and a wristband that’s supposed to activate pressure points related to motion sickness.

Josh first took the Homeopathic remedy. The label boasted that it was aspirin free, non-drowsy and without side effects. The primary ingredient was Ginger. Perhaps it was Josh’s first choice because a favorite TV show, Mythbusters, tested and found the results “plausible”. On Oahu’s North Shore, we headed out to sea for a half hour ride. The boat was compact and on the rear deck rested the huge shark cage we’d soon be bobbing in. I handed out ginger candies to our group of five, the captain and his one-man crew.

It was late in the afternoon and the winds had picked up. Not good conditions for a smooth ride. About 30 minutes later we were circling in the Whitecaps, looking for the orange buoys to attach our anchor to. The current or winds had pulled them beneath the waves. It was getting late, so our Captain, Richard Wyatt, decided to cut the engine and drop the cage.

My first Galapagos Shark, luminous and almost ghostly in the dark blue, materialized on the side of the boat. Next, we noticed fins slicing the surface near the engine. There was no bait, no chumming. Captain Richard said that the crab boats use the same kind of engine. He told us that “The sharks hear the engine hum and circle close, having learned to feed on what the crabbers toss over the side.” The only tasty morsels going over the side on this trip were attached to our bodies!

Nevertheless, we were game. The cage was lowered and tucked close to the side. Josh had the only green face in our group, so the Captain encouraged him to get in first. It happened so fast that I was shocked and my mothering instincts flared. Before I’d had time to really assess what skills we’d need or deal with my own nervousness, I jumped in next.  For the next 25 minutes, we fought to stay in control of our limbs as the sharks swerved into focus. At one point I counted more than ten in the water. They were calm and circled the cage, close and then retreated into the darkness. It was mesmerizing and weird. There was nothing aggressive about them and they actually spent more time near the rear of the boat looking for hand-outs. We bobbed in the sloshing water and held onto the cage. As uncomfortable as the surging was, it faded compared to the wonder of being so close to those mysterious, gorgeously gray creatures.

Afraid? Well yes, my sense of self-preservation is stronger than you may have assumed. I’ve been on several shark dives in other places in the world and this was my first in a cage. The Galapagos sharks are not interested in humans. According to our captain, there have been only five reported bites worldwide and it’s usually due to odd circumstances or risky interactions. We were in a cage and as long as we did nothing to provoke them, all was well. The nerve-wracking sense of danger thawed quickly once we were in the water and close to them. 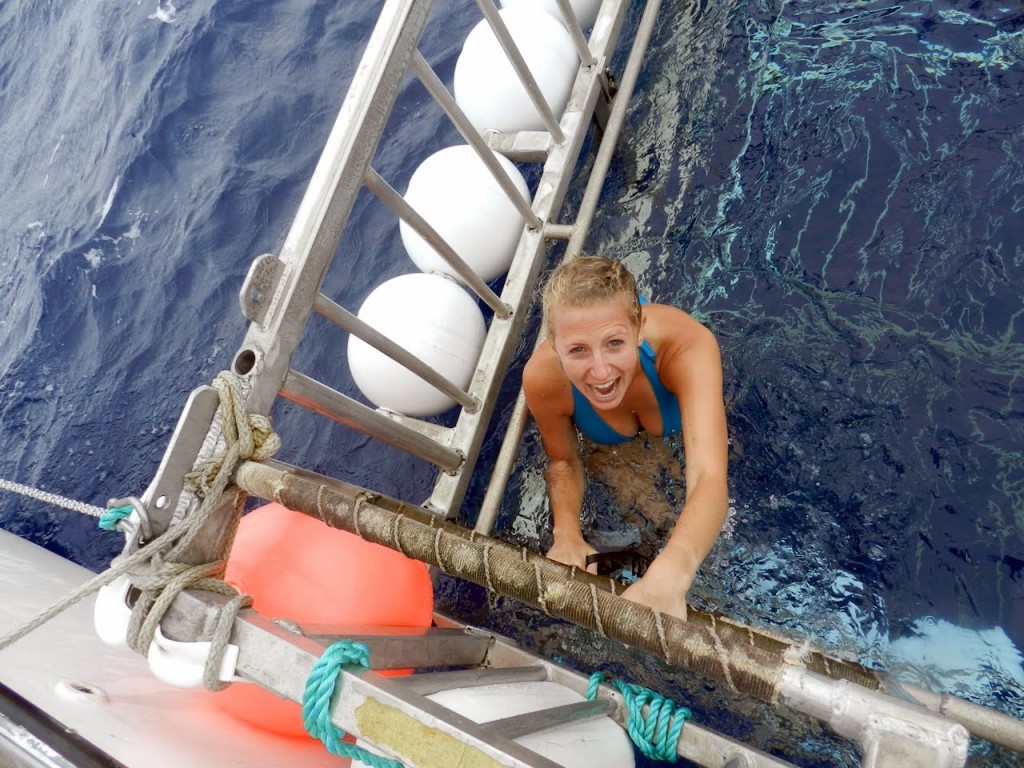 Josh managed to hold onto his camera. He seemed comfortable and thoroughly engaged in the encounter. We were one of the last to climb back onboard. The captain offered thick towels and snacks as the cage was winched back up and into place. Within minutes we were sitting hushed and thoughtful, working to absorb the experience.

Sadly the Homeopathic remedy only partially worked and Josh was grateful to return to shore. Still, the trip was a success and he consented to trying one more boat dive before leaving Hawaii. It seems that he’s gotten the dive bug after all.

Why it happens: Your eyes tell you that walls and all are stationary, but other senses, your inner ear, and fine muscle control are telling you something else. Your brain gets conflicting information.

Find what works for you:

1. Ginger Pills – These are what Mythbusters TV crew found most plausible.

2. Homeopathic Remedies – There are many different ones and each body responds differently. Ask a professional for recommendations for your constitution. We tried CLEAR Motion and Digestive Aid capsules and they didn’t seem to work very strongly.

Homeopathic remedies have been used for centuries in Europe, are available over the counter at health food and many drug stores. They have the bonus of no side effects or counter effects.

3. Ginger Candy – I’ve found that the Ginger People’s Ginger Chews travel well and are less sweet or sticky than other. Warning: When trying for the first time, suck first before chewing them as the flavor is very strong.

4. Dramamine or other over-the-counter motion sickness medication – In the community of divers, this is always packed in with the dive gear. We found that the non-drowsy version is best. Taking the 12-hour Dramamine helped. It can be taken the night before the dive and most of the side-effects diminish. Canadians have access to a 24-hour version.

5. Wristbands – These activate pressure points related to motion sickness and nausea. Josh found them uncomfortable and if they’re not positioned perfectly (it’s slightly different on everyone), they didn’t work well.

Time for a beach getaway? Where to stay in Puerto Penasco, Mexico 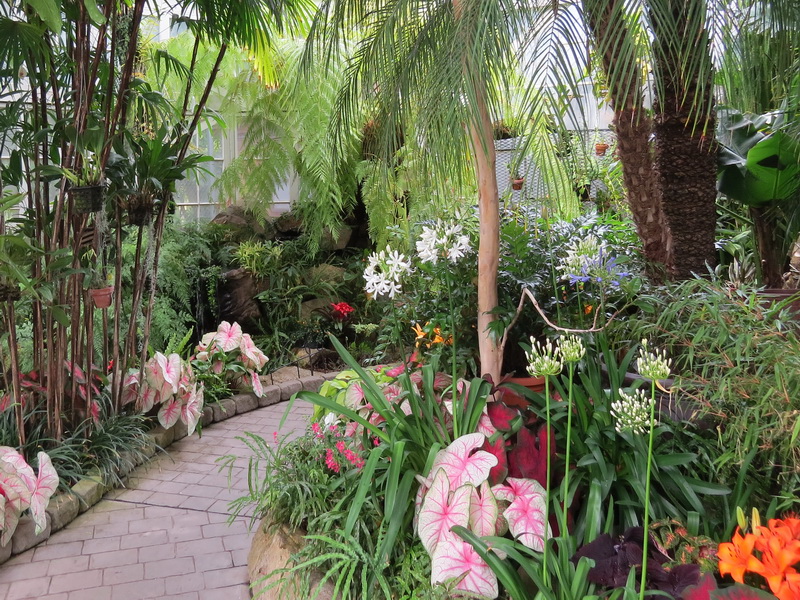 An open and shut case 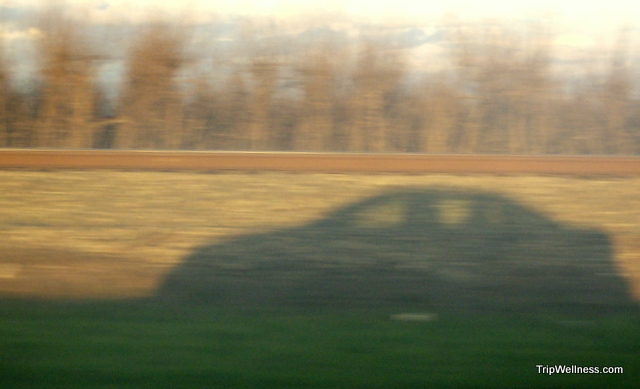